Kim stopped by Wednesday night’s episode of the Tonight Show Fallon Five, a five-minute version of Fallon’s late night talk show, to chat about her epic run at the Olympics. The 17-year-old Olympic half-pipe snowboarder —and internet snack hero for her tweets about churros and breakfast sandwiches—spoke with Fallon about what it is like to win a gold medal. “Well, I felt really empty at first. Does that make sense?” she said. “Just emotionless. I was just, like, there.”

“I don’t know if I’d feel that feeling,” Fallon joked.

After the interview, Fallon invited Kim to take her newfound fame to the streets. She and Fallon headed to the NBC Studios to photobomb fans snapping 2018 Winter Olympics photos at 30 Rock. While tourists stood on a faux-Olympic platform, Fallon and Kim snuck up behind them and crashed their pics while eating sandwiches, holding Olympic torches, or simply goofing around. Kim proved that if photobombing was a sport, she would be a top competitor.

Kim got her own surprise on the show, though. Fallon took the opportunity of Kim’s visit to the set to share the news that she was going to be on the front of Kellogg’s Corn Flakes box. Kim may be able to eat other snowboarders for breakfast, but Corn Flakes taste better. 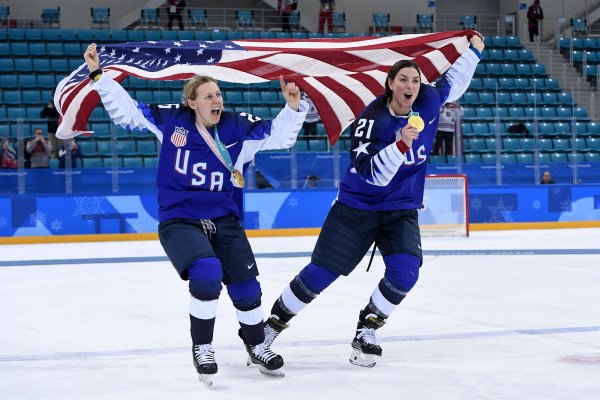 America Beat Canada in Hockey and Curling at the Olympics in One Day. The Reactions Are Pure Insanity.
Next Up: Editor's Pick