Parents of Fraternity Hazing Victims Come Together for the First Time: 'We Don't Want Any More Kids to Die'

The parents of more than a dozen students who have died in alleged fraternity hazing incidents will gather for the first time this weekend, traveling from around the country to South Carolina on a mission to prevent future hazing deaths.

“We need to start talking about this, and we feel like people might start to listen if…we start to work together as a unified body,” said Cindy Hipps, who organized the anti-hazing retreat in Greenville, South Carolina. Her 19-year-old son, Tucker, died in 2014 after falling from a bridge during a predawn run with Clemson University’s Sigma Phi Epsilon fraternity. Hipps has maintained that her son’s death was a hazing incident, an allegation the fraternity denied before settling a wrongful-death lawsuit.

Hipps has become a strong advocate for fraternity and university accountability since her son’s death, shepherding the passage of the Tucker Hipps Transparency Act in South Carolina, which requires universities to publicize records of misconduct by student organizations. But she is troubled by how pervasive the issue remains.

Tim Piazza died in February 2017 at Penn State, suffering traumatic injuries in a fall down the stairs after being forced to drink a toxic amount of alcohol in an alleged Beta Theta Pi hazing ritual, according to a grand jury report. Nolan Burch died in 2014 after an initiation event while pledging Kappa Sigma at West Virginia University, according to police. Matt Carrington died in 2005 at Chico State in California after an alleged hazing ritual in which he was made to drink an excessive amount of water.

Their parents — along with a dozen other sets of parents who have lost a child to hazing — will gather at the anti-hazing retreat on Friday and Saturday, alarmed by a string of fraternity hazing deaths last year. Several universities have responded by temporarily suspending Greek life, changing recruitment rules and launching task forces to reform campus culture.

The anti-hazing retreat will also include hazing experts and university administrators. While most of the parents who are attending were affected by fraternity hazing, one set of parents lost of child in a marching band hazing incident.

The agenda is packed with workshops and discussions aimed at strengthening hazing laws, increasing transparency in Greek organizations and developing programs to teach middle and high school students about hazing. But the gathering will also be a support group for parents, who are united by the painfully similar way their sons died.

Burch said she leaned heavily on Hipps when their sons died within months of each other. For more than three years, Burch, who lives in Buffalo, New York, has exchanged texts, emails and phone calls with Hipps, who lives in Piedmont, South Carolina. “We’ve been through a lot,” Burch said. “I don’t know what I would’ve done without her. She kind of paved the way for me and told me what to expect and what not to expect.”

On Friday, they’ll meet for the first time in person. Like them, many of the parents involved in the retreat have previously communicated by email and Facebook. They’ve become familiar with each other’s stories, sharing frustration over the way their children died and disappointment over how their cases were handled. “I feel like I know all these boys. I never met them — Tucker and Tim and Matt,” Burch said. “Talking with these other families, each boy sounded the same. They sounded strong and confident and would do for others in a heartbeat.”

Hipps regularly posts articles and updates to her Facebook page, sharing information about new hazing incidents and examples of fraternity reform at different schools. She has made an effort to reach out to other parents whenever she hears about a new hazing death. “Some people want to talk, and some people don’t and you just say, ‘I’m here if you need me and you can call me any time, day or night,'” Hipps said. “Because I can tell you I’ve spent a lot of nights wide awake. And I have tons of friends, I’ve had lots of support, but it would’ve been nice to have somebody that’s been through this.”

When her son died, Hipps set out to learn about hazing laws and past hazing incidents for the first time, and she was quickly overwhelmed. By gathering parents together, she hopes to consolidate what they know and broaden their impact as they call for stronger laws against hazing and ask universities and law enforcement agencies to hold students accountable.

“We sent our sons off to college, and two, three months in, we don’t have a child coming home for Thanksgiving break. It’s insane. You spend your life preparing these kids and sending them off and thinking they’re going to school to get an education and be safe, but that didn’t happen with us,” Burch said. “I think it’s going to be very emotional, but we also have a lot of work to do. We have to get this done. We have to change things.” 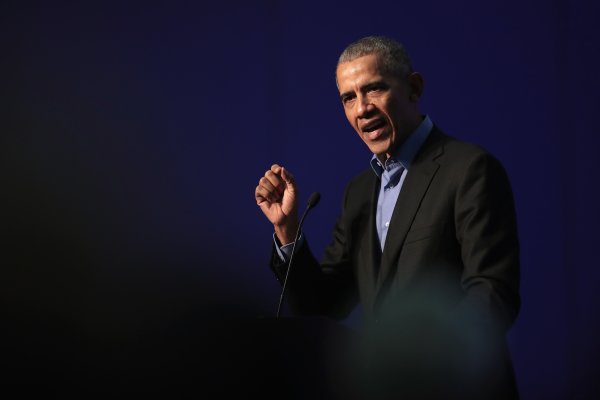 'We've Been Waiting for You.' Barack Obama Praises the Teen Shooting Survivors Fighting for Gun Control
Next Up: Editor's Pick