President Donald Trump attempted early Thursday to clarify comments he made the previous day — when he suggested during a listening session with school shooting survivors that arming “adept” teachers could be one way to end future tragedies faster — by calling again for giving guns to weapons-trained teachers.

At the listening session with six students who survived the school shooting last week at Marjory Stoneman Douglas High School in Parkland, Florida, Trump said concealed-carry for teachers “of that type of talent” would be able to stop a school shooter “very quickly.”

“If you had a teacher with — who was adept at firearms, they could very well end the attack very quickly,” he said during the session.

Trump reiterated the point Thursday, saying that he did not call for arming all teachers, before pushing the idea that “highly trained teachers” could stop school shootings.

“If a potential ‘sicko shooter’ knows that a school has a large number of very weapons talented teachers (and others) who will be instantly shooting, the sicko will NEVER attack that school,” Trump continued. “Cowards won’t go there … problem solved.”

David Hogg, a survivor of the Florida school shooting, declined to attend the session with Trump. Hogg responded to Trump Thursday, saying he respected the President’s view but that resources for arming teachers are scarce. According to a Washington Post analysis, arming 20% of teachers would cost a minimum of $251 million and exceed $1 billion at most.

Trump’s tweets come amid a growing call for stricter gun laws from school shooting survivors and parents whose children were murdered in shootings. Angered students, parents and teachers confronted Florida Sen. Marco Rubio Wednesday at a CNN town hall, with student Cameron Kasky asking Rubio directly: “Can you tell me right now that you will not accept a single donation from the NRA?” In response, Rubio said that people buy into his agenda and that he supports keeping guns away from people with mental illness. The senator said he does not support arming teachers.

Trump, who landed in office with help from the National Rifle Association, indicated support for small steps toward limited gun reforms. He directed the Justice Department on Tuesday to propose regulations that would ban gun accessories like bump stocks, and supports efforts to reform the background check system. Trump tweeted Thursday that he will push the minimum age to purchase a semiautomatic weapon to 21 from 18.

“Congress is in a mood to finally do something on this issue — I hope!” he said. 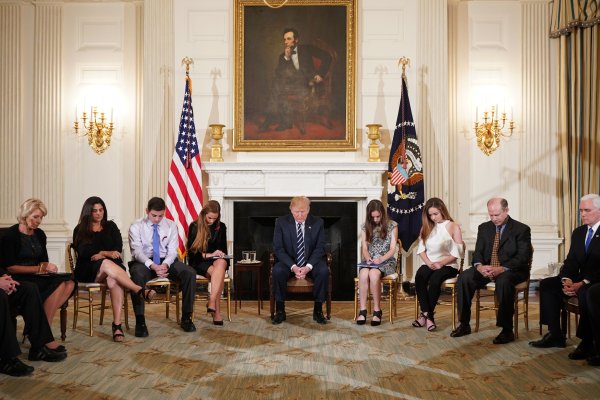