After Billy Graham, Rick Warren may be the most famous, living evangelical in the world.

The day Graham died at age 99, Warren, the pastor of Saddleback Church in Lake Forest, California, and the author of the bestselling The Purpose Driven Life, shared his memories of America’s most famous evangelist with TIME.

“Billy was my hero and my model,” Warren says. “It would be hard to overestimate Billy Graham’s influence on my life and ministry.”

Warren admired Graham from an early age. He read his first Graham book Peace With God when he was in the 6th grade. At 17, he heard Graham speak for the first time at the Oakland California crusade. While still in high school, Warren began to speak to youth groups and churches. “Growing up in a Baptist home, Billy Graham was our pope,” Warren says.

Warren first met Graham personally when he was 20. By then, Warren had preached at more than 120 youth crusades on the west coast. Graham noticed, and took an interest in the young preacher. “That began a mentoring relationship with him, very close, for the next 40 years,” Warren recalls.

Like most in his generation of evangelicals, Warren looked to Graham to learn how to preach. “As I grew older, it really was his character more than even his preaching that became a model for me, his integrity, his humility, his generosity,” Warren says. “I wanted these things in my life.”

Graham invited a college-age Warren to teach thousands of Christian leaders at one of his evangelism conferences in Amsterdam after Warren wrote his first book on how to study the Bible. “I thought, I didn’t feel good about my writing, but if Billy Graham thinks it’s okay, it must be okay,” Warren remembers. “Purpose Driven Life may have never been written if I hadn’t had that encouragement.”

Once Warren flew to Graham’s home in North Carolina after Graham asked him for an update on his PEACE Plan, a global initiative for churches to change things like poverty and disease in their local communities. “He said, ‘Rick this is the greatest vision I’ve ever heard, I just wish I was around long enough to see it happen’,” Warren remembers. “I’m sure I wasn’t the only one who received that kind of encouragement.”

Today, Warren says that some of his most valuable possessions are the personal cards and notes Graham would send him over the years. “One he wrote to me, I think it was the first time I was interviewed on the Larry King show on CNN,” Warren says. “It is framed in my office, between a note from Martin Luther King and Mother Teresa.”

When Warren prayed at President Barack Obama’s inauguration in 2009, Graham sent him the hat he had worn to pray at inaugurations past, with a handwritten note. “He said, Rick, I wore this hat to all the inaugurations I’ve prayed at. You are the man now, I love you like a son in the Lord, God bless you, I’m all for you, Billy,” Warren recalls. He wore Graham’s hat on the inaugural dais.

On American evangelicalism’s civil war over President Donald Trump, with Graham’s son Franklin standing by the commander-in-chief, Warren has stayed largely quiet. “I’m not on the record on anything about the President but I have very strong opinions about that guy,” he says.

Warren attributes much of his approach to his mentor. “By not getting involved in partisan politics, he ministered to politicians clearly,” Warren says. “He knew what it meant to be a bridge builder and a unifier, rather than a divider.”

For now, Warren is focused on building evangelical momentum behind the scenes to combat racism, to support immigrants, and to speak out on sexual abuse and harassment.

“He taught me to avoid the flatterers, ignore the critics, ignore the cheers and the jeers on the sideline, just keep focused on your purpose,” Warren says. “That humility allowed him to learn from anybody. I’ve adopted that.”

If there is a Bible passage that comes to mind about Graham, Warren says it is in the New Testament book of Acts: “David served God’s purpose in his generation, and then he died,” it reads.

Every Christian must serve God in his or her own time, Warren says, learning to serve God’s eternal causes in a changing world.

“That is what Billy did,” says Warren. “And then, he died. To me, that would be a great thing to have on your tombstone.” 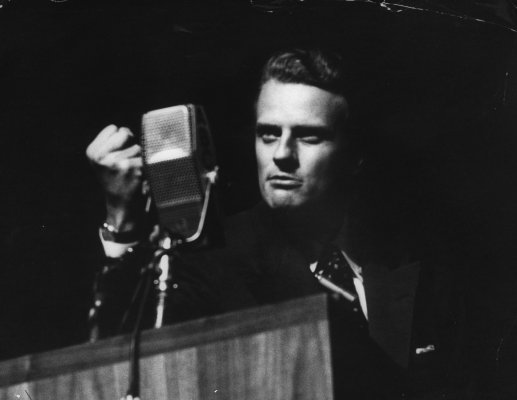 The Billy Graham I Knew
Next Up: Editor's Pick