President Donald Trump suggested Wednesday during a listening session with survivors and family members of school shootings that arming teachers could be one solution to stopping tragedy.

“An attack has lasted, on average, about three minutes. It takes 5 to 8 minutes for responders, for police to come in. If you had a teacher who is adept at firearms, they could very well end the attack very quickly,” Trump said at the event, flanked by two teenage girls who survived the school shooting last week in Parkland, Florida. “The good thing about that …. you will have a lot of people that would be armed, that would be ready.”

Trump also expressed a desire to strengthen background checks and is reportedly considering raising the age limit to buy certain types of guns. Trump also announced on Tuesday that he was signing a memorandum directing Attorney General Jeff Sessions to implement regulations banning bump stocks, modifications that increase the rate of fire for semi-automatic rifles.

Six students who survived last week’s shooting at Marjory Stoneman Douglas High School in Parkland Florida attended the event, accompanied by their parents and Christine Hunschofsky, the Mayor of Parkland. Two parents who lost their first grade children during the shooting at Sandy Hook Elementary School in 2012 and founded a gun violence prevention group, Nicole Hockley and Mark Barden, were in attendance. So were students, teachers and parents from three local Washington D.C. schools, Thurgood Marshall Academy, Friendship Public Charter School, and Parkmont, some of whom recounted their own losses and experience with gun violence.

“We want to learn everything we can learn, and starting about two minutes after this meeting we’re going to work,” Trump told those in attendance. “You’ve gone through extraordinary pain and we don’t want others to go through the kind of pain you’ve gone through. It wouldn’t be right.”

White House Press Secretary Sarah Huckabee Sanders told reporters on Tuesday that the President would be discussing “a wide range of issues” with those attending the session. “One of the things that the President wants to do is make sure that he sits down with a number of people from across all fronts,” she said.”And we want to make sure that we’re meeting and talking with as many people that not only are affected, but that play in this process as possible.”

Trump asked those in attendance what they thought about his suggestion to arm teachers. Some, like Hunter Pollack, whose 18-year-old sister Meadow was killed in the Parkland shooting last week, concurred with Trump’s assessment; he said having more armed people on campus could have saved his sister’s life.

But others explicitly disagreed. “Rather than arm them with a firearm, I would rather arm them with the knowledge of how to prevent these acts from happening in the first place,” said Hockley. Barden, whose wife is a school teacher and could not attend the session, told Trump her experiences showed why he was wrong.

“She has spent more than a decade in the Bronx she will tell you that school teachers have spent more than enough responsibility than to have the awesome responsibility of lethal force to take a life,” he said as the room filled with a smattering of applause. “Nobody wants to see a shoot-out in the school, and a deranged sociopath on his way to commit an act of murder in a school… knowing the outcome is going to be suicide, is not going to care if there is someone there with a gun. That’s their plan, anyway.” 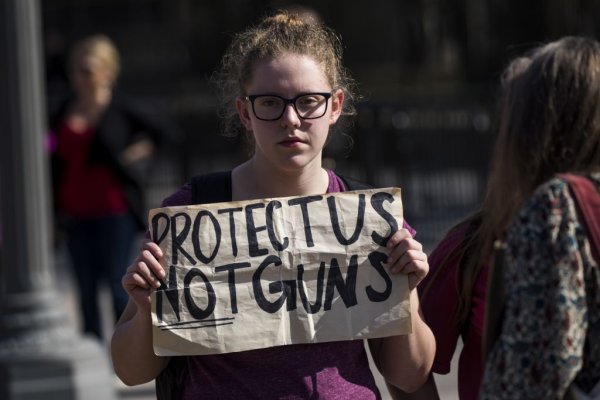 'Baby Steps.' Here Are the Gun Control Proposals President Trump and Congress Are Considering
Next Up: Editor's Pick