Hot on the heels of headlines linking alcohol consumption with longer life comes new research that casts a much more sobering light on drinking. According to an analysis of more than 1 million people—the largest study of its kind to date—scientists say that heavy alcohol use is the biggest modifiable risk factor for dementia, especially early-onset forms of the disease.

The findings, which are published in The Lancet Public Health, came as a shock to the researchers involved. “We hypothesized that alcohol would play some role, but I don’t think anyone expected the size of the effect to be so large,” says lead author Dr. Jürgen Rehm, director of the University of Toronto’s Center for Addiction and Mental Health Institute for Mental Health Policy Research.

There have been few studies examining the potential role of heavy alcohol consumption, Rehm says. Some research has suggested that a drink or two a day may have a protective effect on cognitive health—but other studies have linked drinking, even at moderate levels, to detrimental effects on brain structure. In a recent review by the Lancet Commission on Dementia Prevention, Intervention and Care, reducing alcohol consumption was not included as one of the nine lifestyle changes that may reduce the risk of dementia.

To investigate the relationship further, Rehm and his colleagues analyzed hospital records of more than 1 million adults in France who were diagnosed with dementia between 2008 and 2013. The researchers looked for known dementia risk factors, such as tobacco smoking, high blood pressure, type 2 diabetes, lower education and hearing loss. But they also looked for evidence of alcohol use disorders—identified as alcohol-related mental, behavioral or physical health conditions (like liver disease or head injury) listed on patients’ hospital records.

Surprisingly, they found that having an alcohol use disorder was the strongest predictor of a dementia diagnosis, for both men and women, out of all the potential risk factors included in the analysis. The association between alcohol use and dementia remained significant across all age groups in the study, and across all different types of dementia, including Alzheimer’s disease.

People with drinking problems were at especially high risk of developing early-onset dementia. Of the 57,000 people diagnosed with dementia before age 65, nearly 60% had been diagnosed with alcohol-related brain damage or with other alcohol use disorders.

The authors say their study adds to the mounting evidence that excessive alcohol poses serious health risks, and that many people drink regularly at levels that are hazardous to their physical and mental health. “As with a lot of things, the dose makes the poison,” says Rehm. “Every year, more than three million deaths are linked to alcohol—so clearly, we drink alcohol in quantities that are way too high.”

The study was only able to show an association between drinking and cognitive problems, not a cause-and-effect relationship. But the findings are still concerning, say the authors. They also point out that, because only the most severe alcohol problems were involved in the study (those that involved hospitalization), it’s likely that heavy drinking could be an even bigger contributor to dementia than their results suggest.

Rehm says countries like France and the United States should do more to screen for and treat alcohol use disorders, and that doing so may help slow the rapidly growing prevalence of dementia worldwide. The bottom line, he says, is that “the more you drink, the higher your chances of dying,” either from dementia-related causes or from other alcohol-related conditions like cancer.

“People should really start thinking about their alcohol consumption,” he says. “They don’t need to become abstainers or teetotalers, but in many cases, they could reduce their drinking to safer levels.” 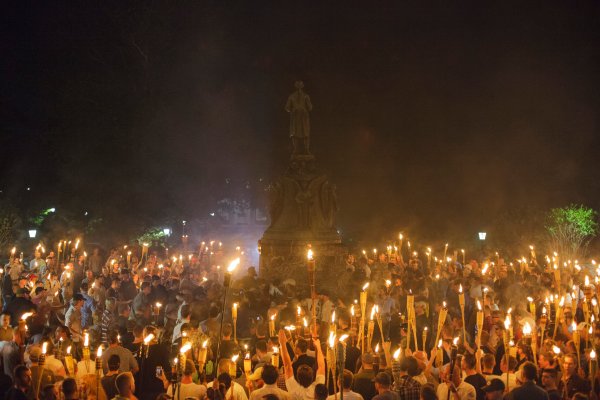 White Supremacist and Black Nationalist Groups Both Grew During Trump's First Year as President
Next Up: Editor's Pick