'We Just Had a Gun to Our Heads.' The Florida Shooting Survivors Are Transforming America’s Gun Debate

A student holds a placard as hundreds of students call for greater gun control laws as they protest outside of the White House in Washington, USA on February 21, 2018. (Samuel Corum--Anadolu Agency/Getty Images)
Anadolu Agency—Getty Images
By Charlotte Alter

Last year, Emma Gonzalez was leading Marjory Stoneman Douglas High School’s Gay Straight Alliance and working on a science project that launched a camera into space. Cameron Kasky played Motel (“the ‘miracle of miracles’ guy”) in the school’s production of Fiddler on the Roof.

But now these teenagers have taken up a new extracurricular activity: changing the lax gun laws that allowed a troubled former student to obtain a semi-automatic rifle and massacre 17 of their friends and teachers at the Parkland, Fla., high school last week.

“It should not be harder for me to get this girl in fourth period to call me back than it is to get an AR-15,” Kasky told TIME Wednesday.

As the students’ movement gains visibility, they have faced backlash from bots and trolls who spread conspiracy theories about them and accuse them of being “crisis actors.” But the kids just laugh it off. “You should have seen me in Fiddler on the Roof,” Kasky says. “Who the hell would pay me to act?”

Indeed, the kids’ #NeverAgain movement is adding a powerful new dimension to the conversation about gun violence. The Parkland students now occupy a unique position in the debate: they’re the first school-shooting survivors who are old enough, angry enough, and media-savvy enough to force the nation to grapple with a problem that adults have failed to solve.

Gonzalez agrees. “They don’t know what it’s like to not feel comfortable in a crowd anymore, or to have to change where you sleep because you don’t want someone breaking into the window in your room, you can’t listen to a loud noise because you think someone’s going to run around the corner and fire 18 bullets in you,” says the high-school senior. “Every single person at our school who was there on that day and lots of people in our families understand how that feels.”

Across the U.S., students have marched on capitols and walked out of school to protest gun violence. Hundreds of students protested at the Florida state capitol in Tallahassee on Wednesday, chanting “What do we want? Gun control! When do we want it? Now!” Around 200 people, including students, rallied at the Vermont state capitol Tuesday morning to urge the State Senate to require background checks for private gun sales. Protesters gathered everywhere from Littleton, Colo.—site of the tragic Columbine High School massacre—to Cedar Rapids, Iowa to Hoschton, Ga., where some students played Uno during the walkout, according to public Snapchats. Washington was not exempt: Maryland high school students swarmed the U.S. Capitol chanting “Hey, hey NRA, how many kids did you kill today?” By mid-afternoon, the city’s Union Station was jam-packed with students carrying signs against gun violence.

“Our entire lifetime has been the lifetime of school shootings in America,” said 18-year old Leo from Marietta, Ga., who was interviewed by Buzzfeed News at the Tallahassee rally. “Elementary school children from Sandy Hook couldn’t change your mind, so now the high school and college students are gonna change your mind,” Dana, a 20-year old college student, told Buzzfeed at the event. “Get ready, because this sh-t’s not stopping.”

Experts see the massive youth uprising as a shift from the gun debates that typically follow a mass shooting. “It is something new, and some of them have spoken very powerfully. I think the novelty by itself has seized a lot of attention,” says Robert Spitzer, a professor of political science at SUNY Cortland who has written five books about gun policy. “It’s possible they could enact some changes in the national debate.”

So far, the movement has few tangible wins. The Florida legislature rejected an assault-weapons ban this week. A Miami Herald survey of state lawmakers found that few Republicans were planning to budge on the topic, though some said they might consider other restrictions that make it harder for troubled young people to get guns.

But the #NeverAgain movement is just getting started. This is a crusade that is as much about young Americans finding their voice as it is about gun policy. “We’ve been having political discussions non-stop all through high school, and we’ve been looking for an opportunity to show that we’ve been learning,” says Gonzalez. “It’s incredibly frustrating to be looking at things and not be able to vote.”

But now Gonzalez can. Kasky, who will turn 18 just a few days after the midterm elections, won’t be able to vote this year. But part of their movement is expanding youth-voter registration and boosting voter turnout so that every eligible high school and college student shows up to vote against NRA-endorsed politicians in November.

“Everyone who can vote is going to be voting,” Kasky says. “Especially since we just had a gun to our heads.” 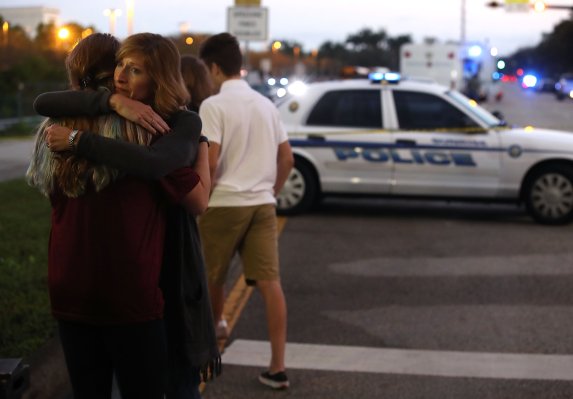 Many Mass Shootings in America Have 1 Thing in Common: AR-15 Rifles
Next Up: Editor's Pick