The world has gone cold. We all need to step up. There are people making billions off the emotional and physical suffering of others. It’s time for payback.

I survived the opioid crisis. I narrowly escaped. I was isolated but I wasn’t alone. When I got clean, I became aware of the numbers of bodies piling up. 42,000 people died of opioid overdoses in 2016.

I became addicted to OxyContin four years ago. I began by swallowing the pill as prescribed. At first 40 milligrams was too much; by the end I needed 450 mg to maintain. It’s the most insidious drug I’ve ever met, it’s the way that the need grows and grows. My life revolved entirely around getting and using, counting and recounting Oxy. I rarely left my room. Like all opiate addicts, my crippling fear of withdrawal was my guiding force. After the doctors cut me off, I turned to the street. When I ran out of money, I copped dope. I ended up snorting fentanyl. Finally, I overdosed.

A year ago I went into rehab for two and a half months. I was one of the lucky ones who could afford an excellent hospital, which isn’t an option for most Americans. I’ve been clean for a year. Getting off and staying off drugs are two different things, each extremely difficult in their own way. I’m learning to navigate unfamiliar terrain, as are so many more like me. But I have a sharpened clarity and a sense of purpose.

When I got out of treatment I decided to make the personal political by telling my story and turning it into activism. My fight is against those who are responsible for the opioid crisis. I am specifically targeting the Sackler family, the private owners of Purdue Pharma who manufacture and distribute the drug most responsible for this epidemic: OxyContin. The idea that a pharmaceutical company could falsely brand a pill containing opiates, the most addictive substance known to humankind, is outrageous. [Editor’s note: For Purdue’s response to Goldin, please see footnote.]

I read the excellent articles in the New Yorker by Patrick Keefe and Margret Talbot, who raised the question of where the activists are, like during the AIDS epidemic. I interpreted it as a call to arms. The lack of response to AIDS wiped out my community; all my friends who carried my history are gone. I can’t stand by and watch another generation disappear. I have started to take action by forming a group called Prescription Addiction Intervention Now — PAIN. It began in my living room, like the Silence = Death collective, which grew into ACT UP, who successfully fought the AIDS epidemic in the mid-eighties. PAIN has grown exponentially in the past months. Now my voice is not alone.

My work has always started from the personal; the same is true for my advocacy. I decided to push back against something I know in my body: addiction. The Sacklers/Purdue built their empire like every other drug dealer: exploiting the physical and emotional pain of people, knowingly getting them addicted to their product. 100+ people are dying a day. The bodies are piling up. I don’t know how they can sleep at night. The Sacklers are washing their blood money on the walls and halls on museums that I once took such pleasure from, not knowing that the name on the sign was synonymous with greed.

I’ve decided to target the Sacklers through their philanthropy. We intend to hold them accountable and put social and political pressure on them to respond. They caused this problem, now it’s time for them to find the solution.

Our first action was to publish a portfolio of the Sackler name on the walls of museums and institutions here in the U.S. and in London, along with a portfolio of self-portraits during my active addiction. PAIN’s next action has been to start an online petition, which outlines solutions to the crisis. We are planning other actions on the ground. With each, we demand the Sacklers and Purdue Pharma admit culpability and take responsibility. They need to advertise the dangers of their products as vigorously as they once marketed them to the public. We will not stop until we see the Sackler name on treatment centers all over America and in every other territory which they have exploited. There is no time to waste.

Editor’s note: Purdue Pharma responded to TIME’s request for comment from both the Sackler family and Purdue with the following statement:

“Purdue Pharma is deeply concerned about the prescription and illicit opioid abuse crisis and the impact it is having on families and communities across the country. Despite how our critics portray us, and having less than 2% of all opioid prescriptions, Purdue has led industry efforts to combat prescription drug abuse which includes collaborating with law enforcement, funding state prescription drug monitoring programs and directing health care professionals to the CDC’s Guideline for Prescribing Opioids for Chronic Pain. We’ve also recently announced educational initiatives aimed at teenagers warning of the dangers of opioids and continue to fund grants to law enforcement to help with accessing naloxone.

We would welcome an opportunity to sit down with Ms. Goldin to discuss her ideas. For more than 15 years, this company has supported many of the initiatives she is advocating, which includes collaborating with law enforcement, funding state prescription drug monitoring programs and distributing the CDC Guideline for Prescribing Opioids for Chronic Pain.”

Clarification of the different branches of the Sackler family is necessary. The Sackler family who currently owns Purdue Pharma includes the descendants of Mortimer and Raymond Sackler, but not those of their brother Arthur Sackler. Elizabeth A. Sackler, daughter of Arthur and a major philanthropist, has said that Purdue Pharma’s part in the opioid crisis is “morally abhorrent.”

“Arthur passed away in 1987, eight years prior to the launch of OxyContin. Arthur’s brothers, Mortimer and Raymond, purchased Arthur’s shares in Purdue Frederick (and the subsequent Purdue group of companies) soon after his death.

Arthur’s heirs did not profit from or inherit any ownership or management rights to the Purdue Pharma group of companies constituted in 1991. Further, in the existing litigation involving the production and distribution of OxyContin, none of Arthur’s heirs, including his surviving widow, Jillian, and children, are parties.

Over the course of his lifetime, Arthur was a generous contributor to American and international cultural institutions, including the Smithsonian, the Metropolitan Museum of Art, and Harvard Univ. None of the charitable donations made by Arthur Sacker in the 1970s and 80s prior to his death were funded from the production, distribution or sale of OxyContin or other revenue from the Purdue group of companies.” 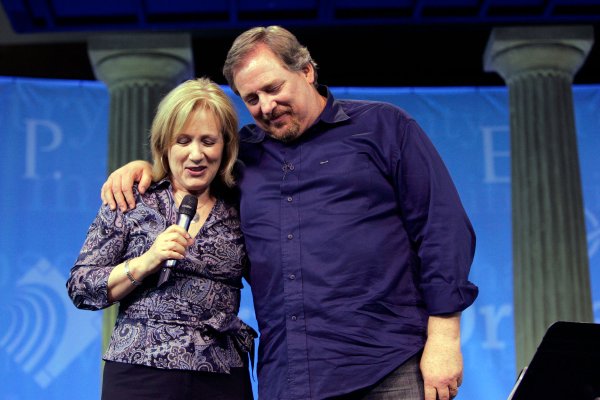 Kay Warren: My Brother Rebuilt His Life After Heroin, and My Family Had to Learn Forgiveness
Next Up: Editor's Pick