It’s become a grim but familiar ritual for gun control activists: there’s a mass shooting in America, cries for action on gun laws follow, and efforts for reform are ultimately stymied by a gridlocked government.

But after 17 people were killed in a school shooting in Parkland, Fla., last week, there are glimmers of hope for proponents of gun control as President Trump and a few Republicans in Congress have signaled support for limited reforms.

Trump directed the Justice Department Tuesday to develop regulations that would ban bump stocks, devices that are used to make legal semi-automatic weapons fire similarly to machine guns. The gun accessory drew national attention after last fall’s massacre in Las Vegas, during which a shooter rigged his weapons with bump stocks before opening fire on a concert in an attack that killed 58 people and injured some 500 more.

“The key in all of these efforts, as I said in my remarks the day after the shooting, is that we cannot merely take actions that make us feel like we are making a difference,” Trump said at the White House. “We must actually make a difference.” In addition, the Washington Post reported that Trump is interested in the idea of raising the minimum age to purchase a semiautomatic weapon from 18 to 21. White House Press Secretary Sarah Sanders said Tuesday that raising the age of purchase is “on the table for us to discuss.”

The White House has also said it wants to look into the background check system. At a press briefing Tuesday afternoon, Sanders said the President supported efforts to reform the National Instant Criminal Background Check System (NICS), which is used to determine whether a prospective buyer is eligible to purchase a firearm. Shooters in several recent massacres were able to purchase weapons due to breakdowns in the system, including the two men who carried out attacks on churches in Sutherland Springs, Tex. in 2017 and Charleston, S.C. in 2015. The Texas shooter was able to legally purchase a weapon despite having been convicted of domestic violence and discharged from the Air Force for bad conduct. The Air Force has said it failed to report the shooter’s criminal history to the NICS system.

“I know background checks are something that the President is supportive of making more efficient and looking at better ways to improve that process,” Sanders said. “And we’re going to continue to look at a number of other factors as well.” Before he became a presidential candidate, Trump wrote in a 2000 book that he supported a ban on assault weapons. But he reversed that position in 2015 and campaigned on strong support for Second Amendment rights.

On Wednesday afternoon, Trump met with parents, students and teachers who have been impacted by gun violence, including families and survivors of the Parkland shooting. “We’re going to pick out the strongest ideas, the most important ideas, the ideas that are going to work and we’re going to get them done,” Trump said at the beginning of the listening session. “It’s not going to be talk, like it’s been in the past. It’s gone on too long.” He said he would be “very strong” on background checks and would put a “strong emphasis” on mental health.

It’s hardly the first time that modest gun restrictions measures have been raised in the wake of a shooting. And there’s a clear push from the public to get something done now. In the aftermath of the Florida attack, support for stricter gun control laws is at an all-time high among American voters, according to a recent Quinnipiac University poll. Ninety-seven percent of Americans support universal background checks, the poll found, while some 83% are in favor of mandatory waiting period for firearm purchases and 67% support a ban on assault weapons. According to the survey, 67% of respondents say it is currently too easy to buy a gun in the U.S. About three-quarters believe Congress should do more to reduce gun violence.

Ideas are out there. After the Sutherland Springs shooting, Republican Sen. John Cornyn, the Senate Majority Whip from Texas, introduced a bill that would, among other things, mandate federal agencies and states to upload all relevant information to the background check system. “Just one record that’s not properly reported can lead to tragedy, as the country saw last week in Sutherland Springs,” Cornyn said at the time. “This bill aims to help fix what’s become a nationwide, systemic problem so we can better prevent criminals and domestic abusers from obtaining firearms.”

The bill, called the Fix NICS Act, has 35 co-sponsors from both sides of the aisle. A companion version was introduced in the House in mid-November, and—after being attached to legislation that would allow concealed weapons permit holders to legally carry firearms across state lines—ultimately passed the House with a vote of 231-198. Before leaving town for the President’s Day holiday, Cornyn said he and leaders of the Senate Judiciary Committee would soon be huddling to discuss gun control policy, including the Fix NICS bill. On Tuesday Cornyn thanked Trump for signaling support for the legislation in a tweet.

Sen. Chris Murphy, a Democrat from Connecticut, is a co-sponsor of Fix NICS and a supporter of gun- violence prevention measures. After 49 clubgoers were gunned down in Orlando in 2016, Murphy led a 15 hour filibuster on the Senate floor. In a statement to TIME, Murphy said he’s glad that the president is open to the Senate’s bill—which he notes is Republican-led and supported by the National Rifle Association. But he said that more should be done.

“I’m glad to hear the president is open to our Fix NICS Act, but let’s not pretend this is some huge concession on his part,” Murphy said. “It’s a good bill and we should pass it into law, but if this is all the White House is willing to do to address gun violence, it’s wholly insufficient.”

Sen. Pat Toomey, a Republican from Pennsylvania, told the Washington Post that he is also planning to introduce legislation that would expand background checks sometime soon. The measure will reportedly be similar to a proposal he and Democratic Sen. Joe Manchin of West Virginia put forward in 2013. (It failed despite overwhelming public support.) Under that bill, background checks would be required for online purchases and sales from unlicensed gun-show dealers. “We’re going to take a swing at that and I’m hoping we’ll be able to do it,” Toomey told the Post.

At the same time, outgoing Republican Arizona Sen. Jeff Flake tweeted Wednesday that he and Democratic Sen. Dianne Feinstein are working on a bill to raise the minimum age of purchase for AR-15’s from 18 to 21.

While most of these reforms would be modest, gun-control advocates are cautiously hopeful. “Those represent tiny baby steps forward,” Avery Gardiner, co-president of the Brady Campaign to End Gun Violence, says specifically of the Fix NICS Act and bump stock regulation. “They are steps in the right direction, but they are not the sorts of meaningful changes that we need in order to reduce gun violence in this country.” Gardiner says she’s worried that Trump’s previous positions on guns and cozy relationship with the NRA will mean that more significant reforms to gun laws will once again be blocked. 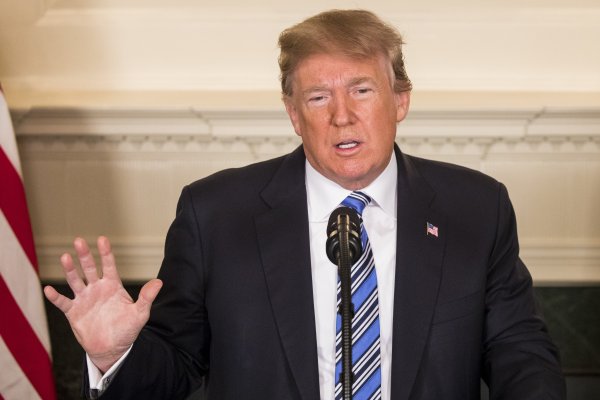 Trump Administration Will Look Into Bump Stock Ban
Next Up: Editor's Pick