Prince William may be a married man and a father of two (soon to be three), but that doesn’t mean he can’t dabble in the wild side. The motorcycle-riding side, that is.

On Tuesday, the Duke of Cambridge dropped by Triumph Motorcycles and the HORIBA MIRA Technology Park in Hinckley, England. Technically, the royal visit was intended to be a chance for the future king to “learn more about world-class British vehicle manufacture and research in the East Midlands,” according to the Kensington Palace Instagram caption that documented his experience. Specifically, he was at Triumph to inaugurate the Factory Visitor Experience.

But we all know why the Prince really was there: to check out the rides, of course. He was snapped posing with one of Triumph’s classic bikes. William is no stranger to motorbikes, owning his own Ducati and a Triumph Daytona over the years, atop which he had been occasionally photographed on his way to the polo grounds. Because as people always say, what’s a chance a stop at the Triumph shop without a chance to take a test ride? (Don’t worry, he wore a helmet for the spin.)

The day also provided him a chance to drive an Aston Martin DB11 on a test track at the Technology Park — and to ride in a specially-designed driverless vehicle developed by HORIBA MIRA, according to the company’s site. Future kings can have fun, too, you know. 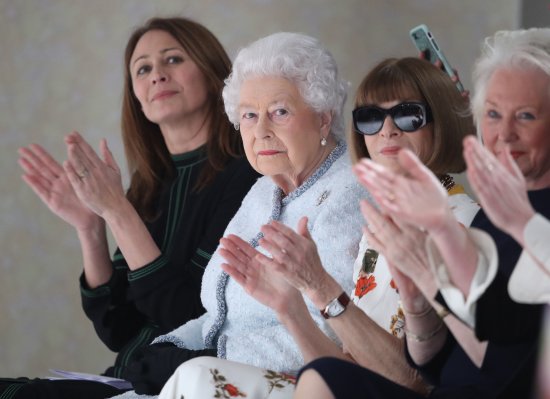 The Queen of England Just Took Her Rightful Seat at the Front Row of Fashion Week
Next Up: Editor's Pick