'We’re Gonna Do What International Law Says We Can Do.' Aboard the USS Carl Vinson in the South China Sea

Crowned with a giant disc-shaped radar — the captains all call it their “eye in the sky” — the E-2C Hawkeye early warning aircraft is typically one of the first to launch and the last to retire on the flight deck of the USS Carl Vinson. By day’s end, more than 100 sorties will have been launched and recovered, flying out in all directions over the disputed waters of the South China Sea.

One of America’s longest-serving Nimitz-class carriers, the Vinson is midway through a deployment that has sent its Strike Group One to Hawaii, Guam and the Philippines. The group’s commander, Rear Admiral John Fuller, says his mission is threefold: fortify friendships; maintain stability; keep the sea-lanes open. “A routine event,” he says.

But it may not seem routine to China, which defiantly considers most of the sea as its sovereign territory. The Philippines, Vietnam, Taiwan, Malaysia and Brunei all lay claim to parts of the sea, through which nearly a third of global trade passes each year. In 2016, the Philippines won a landmark case in an international tribunal based in the Hague, which ruled that China’s territorial claims had “no legal basis.” Beijing rejected the ruling and continued redrawing the map.

Read more: Inside the International Contest Over the World’s Most Important Waterway

In recent years, what once were tiny reefs in the middle of this maritime highway have been expanded and built by Beijing into insular forts, complete with radar systems and what look like anti-ship missile launchers. According to the Asia Maritime Transparency Initiative, 2017 was a “constructive year” for China in the Spratlys (also claimed by the Philippines) and the Paracels (which Vietnam and Taiwan both say are theirs).

But the U.S. isn’t a claimant, and the crew aboard the Vinson, a 1,092-ft nuclear-powered warship shielded by a guided-missile cruiser, two destroyers and eight aircraft squadrons, insists it isn’t here to pick a fight. This, it seems, is a charm offensive.

It’s oh-six-hundred hours when a voice crackles through the loudspeaker and into the cabins of the roughly 5,300 sailors, civilians and pilots who live aboard the ship, and another day begins on what they call their “floating city.” There’s a simple answer to the question: “What are U.S. sailors doing in the South China Sea?” Yoga. Reading. Eating Pop-Tarts. Praying. Lots and lots of flight practice.

“It’s different when you’re above the islands and you get the bird’s eye view,” says Lt. Abigail Khushf, a 26-year-old helicopter pilot from Houston, Tex. “All the pieces of the picture start coming together.” Her aircraft, the MH-60S Sea Hawk, is optimized to deliver humanitarian assistance and carry out search and rescue operations. She’s in the air three to five times a week, circling over the Spratlys, the Malacca Strait, wherever the flagship takes her.

“We’re not trying to send a specific message other than we’re exercising our freedom of navigation and really trying to keep the status quo,” says the ship’s Commanding Officer Capt. Douglas Verissimo, whose first port call was 31 years ago in the Philippines, one of America’s oldest allies in Asia. His next will be in Vietnam, where the Vinson will become the first U.S. carrier to visit the country since the war ended more than four decades ago.

So far, these exercises have been unprovocative. The U.S. regularly conducts FONOPS, or freedom of navigation operations, in disputed seas throughout the world. The current deployment hasn’t yet conducted any; FONOPS are a form of navigational protest, whereby a government vessel legally enters an area in which another party has unlawfully declared excessive claims. When and if the U.S. protests a claim, it will be obvious. 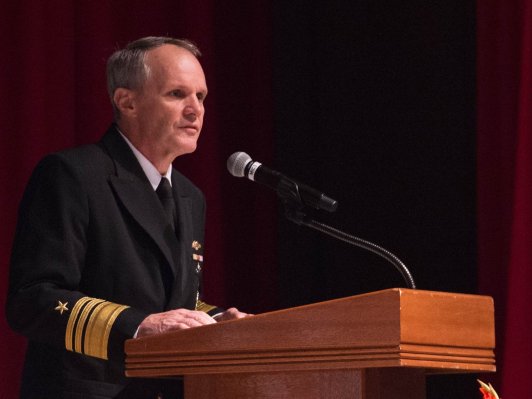 'We're Ready, if Our Nation Calls.' A Top U.S. Navy Commander in the Pacific on China, North Korea and More
Next Up: Editor's Pick