The survey of 159 countries and territories accuses governments across the globe of “shamelessly” backsliding on human rights, cracking down on dissent, and instituting measures that ensured the further persecution of marginalized groups throughout 2017.

In last year’s report, Amnesty said the big question was how far the world would let atrocities go before intervening. The tragic answer arrived in Myanmar, where, the rights watchdog says, world leaders failed to stop the consequences of normalized discrimination and scapegoating as mass atrocities unfolded. The military’s ethnic cleansing campaign sent nearly 700,000 Muslim Rohingya fleeing across the border to neighboring Bangladesh. Survivors have testified to witnessing mass slaughter, systematic sexualized violence and the deliberate razing of their villages.

“The appalling injustices meted out to the Rohingya may have been especially visible in 2017, but the trend of leaders and politicians demonizing whole groups of people based on their identity reverberated across the globe,” it says.

Roseann Rife, Amnesty’s East Asia research director, said, “It’s been clear from the conflicts in Syria and Myanmar that when the international community is reluctant to step in and intervene, we see these atrocities escalate.”

She added that under Trump, the U.S. has moved away from advocating for human rights, and no other world leaders have stepped in “to fill that void.”

Trump has attacked the rights of women and girls, migrants and refugees and members of the LGBTI community since his inauguration on Jan. 20 last year, the report alleges.

The Trump administration’s decision to ban entry to people from six Muslim-majority countries was “transparently hateful,” and set a precedent for the year, Salil Shetty, secretary general of Amnesty International, said in a statement.

However, as world leaders like “Duterte, Maduro, Putin, Trump and Xi are callously undermining the rights of millions,” activists have pushed back and mobilized in greater numbers, Amnesty says. International protest movements like the Women’s March and #MeToo, and mass demonstrations in Poland, Zimbabwe and India all reflect what the report termed “a new era of social activism.”

At the same time, Amnesty warns that as we enter 2018, the 70th anniversary of the Universal Declaration of Human Rights, and even the continued right to peaceful protest cannot be guaranteed, or taken for granted.

“Governments think they can declare open season on human rights activists. They may shut down our newspapers, undermine judges and jail activists, but we refuse to be silenced,” said Shetty. 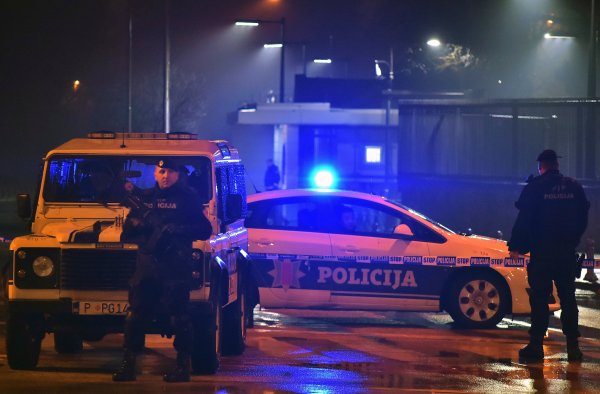 U.S. Embassy in Montenegro Attacked With Explosives
Next Up: Editor's Pick