German Politics Is a Mess, and No One Is as Worried About It as They Should Be

German Chancellor Angela Merkel speaks during the handover of the annual expert report from the Commission of Experts for Research and Innovation in Berlin, Feb. 17, 2016.
Rainer Jensen—dpa/Corbis
By Ian Bremmer

Angela Merkel didn’t say much of anything at this year’s Munich Security Conference. The same cannot be said for those whispering about her on the sidelines.

Most everyone at this year’s Davos-but-for-geopolitics confab was fixated on just how badly Merkel negotiated the tentative agreement for another “grand coalition,” Germany’s third since 2005. In order to get the center-left Social Democrats (SPD) to join Merkel’s center-right party in government, Merkel had to cede plenty to her junior coalition partners, including control of key ministries like the powerful finance ministry.

Given that the SPD got the lowest share of the vote in a national election since World War II (just 20.5 percent, compared to the 33 percent captured by Merkel and her party), its negotiations haul is nothing to scoff at. But it doesn’t hide the fact that both of Germany’s establishment parties are now in free fall.

To be fair, the SPD saw this coming. It had initially tried to avoid joining another coalition government with Merkel out of fear that its close association with the Chancellor and her unpopular migration policy cost it support among the German electorate. But when Merkel’s original coalition talks with the business-friendly Free Democrats and the environmentalist Greens fell apart, the SPD was faced with a choice—either negotiate with Merkel, or push for new elections.

Given that current polls show the SPD faring even worse if elections were run again (indeed, for the first time, a poll released this week shows the far-right AfD ahead of the SPD), it wasn’t much of a choice at all. The SPD entered negotiations and was able to hammer out a deal, and all it cost it (so far) was the head of its party, Martin Schulz, who resigned last week to jettison some of the political baggage involved in striking the deal.

Now the SPD’s party base has until March 2 to vote by mail on whether to accept the terms of the grand coalition deal. Most assume it will pass—why would the SPD base push for another round of elections that are poised to deliver even heavier losses? But there’s genuine dissent in the SPD ranks, particularly among its youth wing, that believes signing up for another four years of Merkel isn’t just a betrayal of its own center-left politics, it’s also a betrayal of sane political strategy.

Given the party’s recent electoral performance, that’s hard to argue with. But it’s also hard to argue that forcing another round of elections will benefit the SPD in either the short- or long-term. Based off conversations I had with folks in Munich, there’s about a 1 in 3 chance that the SPD membership refuses to sign off on the coalition agreement, a not-negligible percentage. If this were any other country, the 1/3 chance would be blaring across headlines; as it stands now, it barely registers a blip.

Merkel could survive a “no” vote from the SPD membership and yet continue to lead the country as the head of a minority government. Should she decide to do so though, she’d be incredibly weakened, and her lasting legacy would be as a politician doing whatever it takes to stay in power rather than as a politician who does whatever is best for Germany.

Of course, there’s a certain amount of complacency among the German populace that’s dulling the sense of political urgency this moment needs. That complacency is being helped by the strength of the German economy, which has raised its growth forecasts twice since government formation talks began. But in this age of the West receding, we’re losing something yet again. No one is as worried about the state of German politics as they should be. 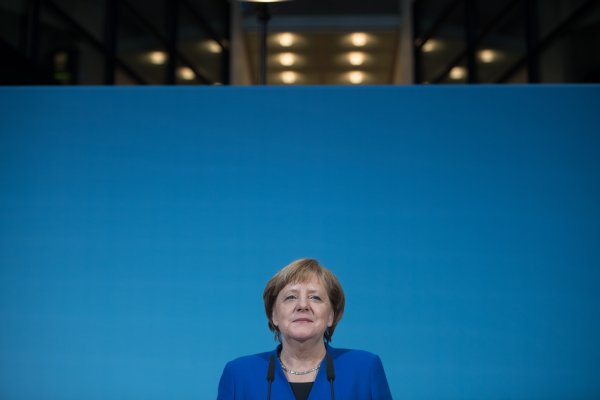 5 Reasons German Leader Angela Merkel's Job Is About to Get Much Harder
Next Up: Editor's Pick