Her Majesty Queen Elizabeth II just made a surprise guest appearance on the closing day of London Fashion Week, appearing on the front row on Tuesday alongside Vogue editor-in-chief Anna Wintour.

It was the first time in her 65-year reign that the Queen has attended London Fashion Week.

Her Majesty, who wore a blue Angela Kelly suit, was there to award emerging designer Richard Quinn with the inaugural Queen Elizabeth II Award for British Design.

The royal family’s official Twitter account says: “The Award, initiated in recognition of the role the fashion industry plays in society & diplomacy, will be awarded annually to an emerging British fashion designer who shows talent and originality, whilst demonstrating value to the community and/or sustainable policies.”

Swapping her throne for the FROW, Her Majesty sat next to Dame Anna Wintour to watch Quinn’s latest AW18 instalment, before the official awards ceremony. She also had a tour of the British Fashion Council (BFC).

The award was created by the Queen’s personal dresser Angela Kelly at the Queen’s request, according to The Telegraph.

The Queen’s appearance comes just a day after she invited fashion designers and artisans to Buckingham Palace for an evening event celebrating the Commonwealth. 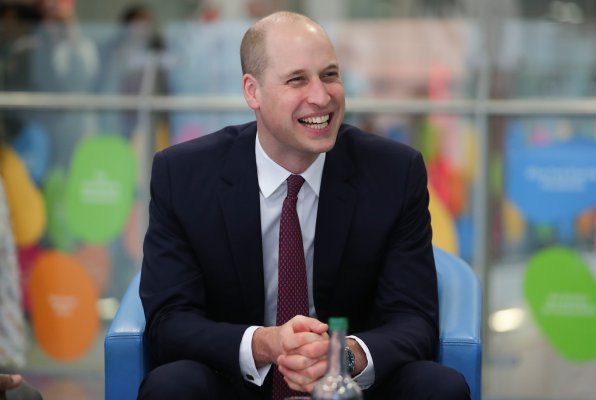 Prince William Spoke Out Against Unrealistic Beauty Standards: 'The Touched-up Pictures Are Not Real.'
Next Up: Editor's Pick