'I Pray for Him Daily.' Why Socially Conservative Women Stand by Trump

Many white evangelical Christian women leaders see the president as an ally thanks to his conservative judicial appointments, anti-abortion policy changes and decision to move the U.S. embassy in Israel to Jerusalem, among other actions.

“Detractors of President Trump would only be satisfied by my complete disavowal and call for his immediate resignation because that’s what they really want,” says Penny Nance, president of the Concerned Women for America, which has half a million members. “We won’t be their little pawns.”

“Though this president’s personal life is alien to us,” she says, “there are things that made us vote for him.”

For Nance, a major reason is that Trump vowed to fight for the causes they believe in, and he has followed through on his promises.

“I’m not surprised by any of this,” she says. “What I was surprised was that American conservative women, primary voters, said it doesn’t matter. The reason they said this is they wanted a champion, who would take the gloves off and punch the bully in the nose.”

Trump’s history and behavior made many social conservatives uncomfortable during the 2016 campaign. Early on, many evangelicals and Catholics questioned Trump’s harsh rhetoric about woman and non-whites, and the social conservative base was deeply fractured, with many backing Ted Cruz, Marco Rubio or Jeb Bush instead.

But social conservative leaders decided to support Trump in large part because he agreed to champion their anti-abortion policies and to appoint a conservative judge to the Supreme Court.

Morality itself isn’t primary for Trump’s opponents, Nance argues, many of whom defended Bill Clinton’s sexual relationship with an intern.

March for Life president Jeanne Mancini praises the White House for its anti-abortion policies, and many in the anti-abortion movement argue that the Trump White House has advanced their cause more than any administration in recent memory. Trump was the first president to address the March for Life live, he appointed Neil Gorsuch to the Supreme Court and he reinstated the Mexico City policy, which prohibits the U.S. from giving foreign aid to non-governmental organizations abroad that provide abortion-related services.

“To have a pro-life administration makes a difference,” she says. “That is where I make my decision in terms of voting. It is not a personal endorsement of a person and all the behavior.”

The March for Life, she adds, invited the White House to participate exclusively because of the anti-abortion policies. “It was not a broad blanket condoning of everything,” she says.

Mancini’s institutional commitment to anti-abortion policies also keeps her from publicly discussing any tension she may feel. “I don’t speak as Jeanne Mancini, I speak representing pro-life Americans,” Mancini says. “As a person I absolutely grapple with some of these different things.”

Rebecca Hagelin, a conservative columnist and former vice president of the Heritage Foundation, believes Trump has acted on biblical principles when it comes to policy.

“My prayer is that as he understands these principles are best for the nation, that they are best in human interactions too,” Hagelin says. “I pray for him daily that if he hasn’t yet connected the dots on personal relationship and family and how women should be treated, that he will soon.”

She also wishes Trump exercised more wisdom. Trump’s approach troubles her, like his reported comments calling African nations “shithole countries.” She feels freer to call it out since she is not in an advisory or policy role. “Mr. President, the way that you talk sometimes is the way we’ve taught our sons never to be like,” she says.

But still, Hagelin’s critique only goes so far.

“He’s done nothing as president anywhere near what Bill Clinton has done in the Oval Office,” Hagelin says. “If I woke up tomorrow morning and found out the president of the U.S. was having affairs in the Oval Office with interns, you bet I would be angry.” 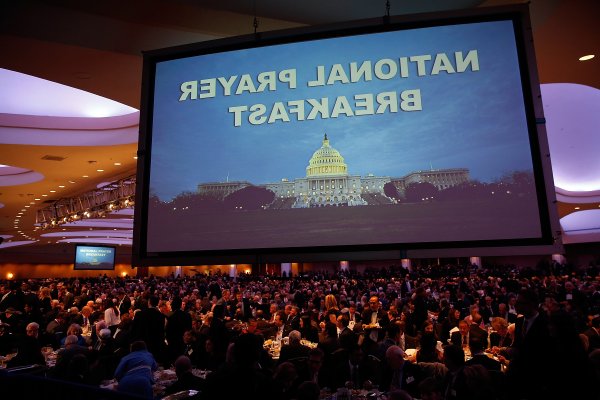 Meet the Two Senators Crossing the Aisle With Prayer
Next Up: Editor's Pick