Albertsons to Buy Rite Aid in Move to Compete With Amazon

Signage is displayed on a shopping cart outside a Rite Aid Corp. store in Hercules, California on Jan. 2, 2018.
David Paul Morris—Bloomberg via Getty Images
By Ivan Levingston / Bloomberg

Grocer Albertsons Cos. will buy drugstore chain Rite Aid Corp. in a deal that would accelerate the remaking of the U.S. retail and health-care industries.

The takeover serves several purposes. Rite Aid will get a buyer after a failed merger with another chain last year. Albertsons will add new locations and size amid increasing pressure from online competitors. And the grocer’s private-equity owners will exit their 2013 investment without having to go through an initial public offering in a turbulent market.

The combined companies will have about 4,900 stores, including 4,350 pharmacy locations, in 38 states, they said in a statement. The Albertsons pharmacies will be rebranded under the Rite Aid name.

Retailers have been under growing pressure from online competitors like Amazon.com Inc., and the corner drugstore has been no exception. While the prescription drug businesses at pharmacies has been relatively stable, front-of-the-store sales have been in decline. Giant retailers like Walmart Inc. are also looking to play a bigger role.

The result has been consolidation.

The deals “demonstrate some of the threats (declining reimbursement, Amazon, etc.) that drug retailers have found themselves under and each of the large public players appears to be trying to solve this issue in a different way,” said Ross Muken, an analyst with Evercore ISI.

The companies have a combined value of around $24 billion, including debt, according to the Wall Street Journal, which reported on the transaction earlier Tuesday.

Rite Aid CEO John Standley will serve as chief executive officer of the new company, the companies said, while his counterpart at Albertsons, Bob Miller, will be the chairman. The companies haven’t decided on a name for the new company 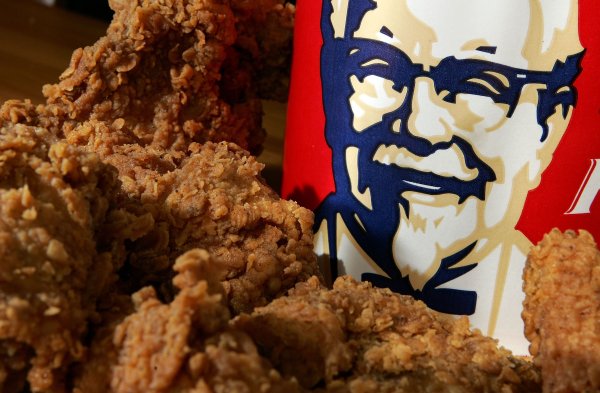 British KFC Fans Are Freaking Out Because the Stores Don't Have Any Chicken
Next Up: Editor's Pick