Olympic records were being broken all over the rink at the ice dance free skate in Gangneung Ice Arena. Canada’s Tessa Virtue and Scott Moir earned gold, their second Olympic title, which makes them the most decorated Olympic athletes in their discipline, earning five Olympic medals in their three appearances at the Games (in addition to the two golds, they own another gold from the team event in PyeongChang and two silvers from the ice dance and team event in Sochi). In the short program part of the event in Korea, they set a new record for the highest overall score recorded.

France’s Gabriella Papadakis and Guillaume Cizeron skated a haunting program to Moonlight Sonata, winning the free skate portion and setting a new record for the highest free dance score (breaking their own record set a few months earlier) which gave them a total score of 205.28 when combined with their short program scores, just behind Virtue and Moir’s 206.07.

The U.S. sister-brother team of Maia and Alex Shibutani clinched bronze, their first Olympic medal in two Olympic appearances, while teammates Madison Hubbell and Zachary Donohue finished in fourth. After an uncharacteristic fall, the other U.S. team of Madison Chock and Evan Bates finished in ninth place.

“We skated our asses off and we’ve got to be proud of that,” says Moir of their gold-medal winning effort. Beyond effort, the winning pair have chemistry. “After twenty years together,” says their coach, Marie-France Dubreuil, “with eyes closed they each know what the other is doing.”

The podium in ice dance is becoming a home-coming of sorts, since so many teams currently or used to train together. Virtue and Moir now train with Papadakis and Cizeron in Montreal with Marie-France Dubreuil, Patrice Lauzon and Romain Haguenauer, and the Canadians used to train with the Shibutanis in Detroit.

The top three teams were a demonstration in how diverse and stylistic the sport of ice dance has become. In the days when eastern European teams dominated the discipline, most teams were indistinguishable from the other, trying to outdo one another on outlandish costumes but still sticking to the same formula of moves and music.

Virtue and Moir, Papadakis and Cizeron, and the Shibutanis couldn’t be more different. Virtue and Moir, known for their precision and sharpness, skated two high energy programs that capitalized on Moir’s outgoing personality and Virtue’s quiet power, while Papadakis and Cizeron’s free skate highlighted their remarkable ability to glide silently across the ice as if they were floating on air rather than on 4 mm wide blades. The Shibutanis showed that romantic chemistry isn’t a necessity for winning an ice dance medal, despite what many had told them throughout their career.

“Along the way in our career there have been a lot of people who told us that maybe siblings shouldn’t be a team,” says Maia as she tears up. “But we believed in ourselves and we accomplished this together and are so proud of all the work we have done.”

The Shibutanis were disappointed with their fourth place finish after the short program, but returned to the Olympic Village and watched old family videos of themselves when they were younger, “just dancing around together, having a good time,” says Alex, as both he and Maia become emotional over the memory. “The family bond we have, it’s a strength no other team in this event has. For all the people who think it’s a deficit to skate as siblings, we’ve made it our strength.”

The Shibutanis, who are the first skaters of Asian descent to win Olympic medals in ice dance, hope that their example breaks down some of the stereotypes against sibling teams in ice dance, and opens the sport up to new types of partnerships and more creative ways of growing the discipline. “It’s so limiting to be labeled as one thing,” says Alex. “It’s almost insulting to the discipline of ice dance where it’s grouped into ‘oh it’s romantic or oh it’s sensual.’ That’s not fair to ice dance, and probably hurting ice dance’s feelings. Ice dance wants to be whatever it can be. We are all put here to hopefully find something we are passionate about and hopefully connect in some way to the people around us.”

The Shibutanis coach, Marina Zueva, agrees that the passion ice dancers express — and judges reward — doesn’t always have to be of the romantic variety. “There are different forms of passion,” she says. “Passion does not have to be like love passion. Passion can be between them and their warmth, and how they reach their goal.”

Papadakis and Cizeron, who earned two world championship titles since the 2014 Olympics, train with the Canadian team in Montreal, and credited the proximity with their strongest rivals with improving their skating. “It’s never been easy. Looking back [training with Tessa and Scott] really made us improve in a way that wouldn’t be possible if we trained alone,” says Cizeron. “We kept pushing each other and we think that was for the best.”

Papadakis agreed, admitting to a wave of emotions after the skate. “We knew it was possible and we wanted [the gold]. But we did our best and we have nothing to regret. I am very moved right now and think I’d start to cry if you tell me that the dog of your grandmother died. There are lots of emotions coming out right now. But we couldn’t have skated better. It was amazing to deliver what we did today for our first Olympics.”

While the Shibutanis relished their first Olympic medal, snapping selfies with their coach and running their hands along the Olympic ice before leaving the rink, their teammates Madison Chock and Evan Bates were struggling to make sense of a fluke mistake that left both of them tumbling during their routine. As the pair entered a combination spin, somehow they clicked blades and fell sprawling to the ice.

“As soon as it happened I couldn’t believe that our butts were on the ice where our skates were supposed to be,” says Chock, holding back tears. Igor Shpilband, their coach, says the entry into the spin is challenging, since Chock is required to jump into it, but it’s not something they have ever tripped up on in their training — ever. “When you go for a difficult element there is a chance you can mess up, but this is not something they ever made a mistake on ever. It’s the last place you expect a mistake to happen,” he says.

As grand a stage as the Olympics are, for competitors it is, after all, just another competition. And while for some the Games represent a culmination of a career, for Chock and Bates it’s just the beginning. They are already planning to redeem themselves at next month’s world championships in Milan, Italy. “We will go home, train and put out the performances we wanted to put out here,” says Chock. 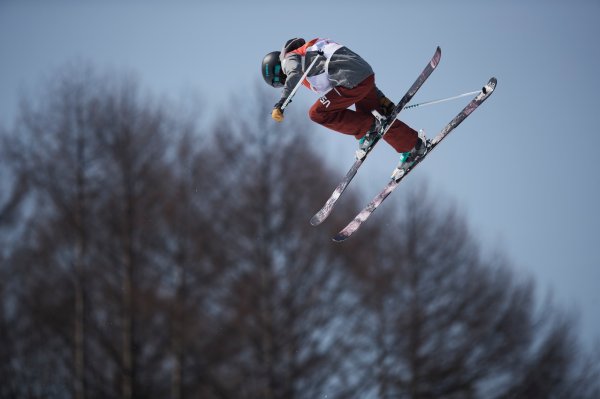