Olympic records were being broken all over the rink at the ice dance free skate at the 2018 Winter Olympics on Monday.

Canada’s Tessa Virtue and Scott Moir earned a gold medal, their second Olympic title. In so doing they became the most decorated Olympic athletes in their discipline, earning five Olympic medals in their three appearances at the Games. In the short program part of the event, they set a new record for the highest score recorded.

France’s Gabriella Papadakis and Guillaume Cizeron skated a haunting program to Moonlight Sonata, winning the free skate portion and giving them a total score of 205.28, just behind Virtue and Moir’s 206.07.

The U.S. sister-brother team of Maia and Alex Shibutani clinched bronze, their first Olympic medal in two Olympic appearances, while teammates Madison Hubbell and Zachary Donohue finished in fourth. After an uncharacteristic fall, the other U.S. team of Madison Chock and Evan Bates finished in ninth place. 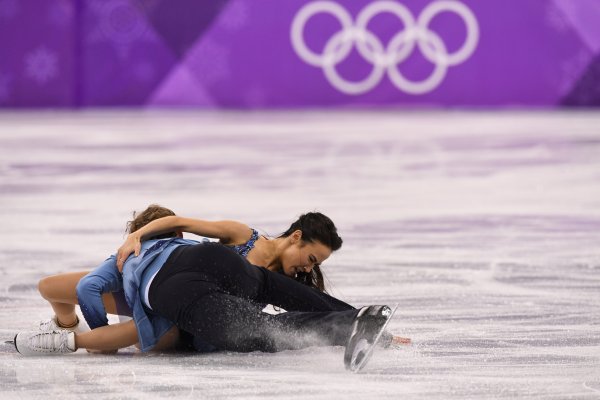 The Internet Is Heartbroken Over This U.S. Ice Dancing Pair
Next Up: Editor's Pick