The shooting at Marjory Stoneman Douglas High School in Parkland, Florida on Feb. 14 left 17 students and staff dead — and replaced the 1999 Columbine High School massacre as the deadliest high school shooting in America. Many of the survivors, thousands of teenagers who used social media to document the horror, aren’t waiting for the adults to make changes to prevent the next school shooting.

They’re taking matters into their own hands, advocating for stricter gun-control laws and more mental health resources for treating troubled peers. Following the shooting, Marjory Stoneman Douglas students, including Emma Gonzalez, have been vocal on social media and in traditional media to call for action with their refrain “never again.”

Calls to action — from national walkouts on March 14 to a March 24 march on Washington, D.C. — spread on social media.

Here’s a guide to the upcoming events that have been organized by the Parkland shooting survivors:

Last week the students from Parkland, Florida began encouraging companies who partner with the NRA — offering perks or discounts to members — to sever ties with the organization. Over a dozen companies have dropped their NRA partnership.

On March 1, actresses Alyssa Milano and Debra Messing along with director Justine Bateman, and Shannon Coulter the co-founder of #GrabYourWallet are planning a full-day boycott of three specific companies that have ties to the NRA. They’re boycotting Amazon and Apple (their respective products Amazon Fire and Apple TV stream NRA TV) and FedEx, which offers a discount to NRA members.

FedEx has come under fire on social media for offering a discount to NRA members. The company released a statement earlier this week saying that “FedEx Corporation’s positions on the issues of gun policy and safety differ from those of the National Rifle Association (NRA). FedEx opposes assault rifles being in the hands of civilians.”

Apple and Amazon haven’t commented on the issue and didn’t immediately respond to requests for comment. NRA TV is also available on Roku, and Google’s Chromecast, according to the NRA’s website.

The Women’s March’s Youth EMPOWER group is planning a national school walkout on March 14, 2018, according to the group’s website. At 10 a.m. in every time zone, organizers are encouraging teachers, students, administrators, parents and allies to walk out for 17 minutes — one for every person killed at Marjory Stoneman Douglas High School.

“Students and staff have the right to teach and learn in an environment free from the worry of being gunned down in their classrooms or on their way home from school,” according to the site.

Students from Parkland — along with support from national organizations like Everytown for Gun Safety; Giffords, the gun safety group founded by wounded former Congresswoman Gabby Giffords; Planned Parenthood and others — are planning March For Our Lives, on March 24, 2018, a march in Washington, D.C., to call for school safety and gun control.

“The mission and focus of March For Our Lives is to demand that a comprehensive and effective bill be immediately brought before Congress to address these gun issues,” according to their website. “No special interest group, no political agenda is more critical than timely passage of legislation to effectively address the gun violence issues that are rampant in our country.”

According to a tweet from March For Our Lives, the ride share company Lyft is offering free rides to marches across the country on March 24.

TIME reached out to Lyft to see if there’s any other information about the rides and will update as necessary.

A growing movement titled #NationalSchoolWalkout is being called for by Connecticut student Lane Murdock and others. Murdock lives just 20 minutes away from Sandy Hook Elementary School, according to NBC News. In December 2012, 20 students and six staff members were gunned down at Sandy Hook.

The plan calls for high school students to walk out on April 20, the 19th anniversary of the Columbine shooting, from at 10:00 a.m. local time until the end of the school day. The walkout encourages students to stay on campus in a common space for 17 minutes of silence in honor of the 17 people killed at Marjory Stoneman Douglas High School, and then to participate in an open mic.

More information is available on their website including resources for students planning marches at their schools.

A letter writing campaign started by Parkland students, named #NeverAgain: Pick Up A Pen, has also been circulating on Twitter.

Actor Josh Gad has also started a challenge to raise money for a scholarship in honor of Alex Schachter one of the students killed at Marjory Stoneman Douglass. Schachter’s poem “Life Is Like A Roller Coaster” was read by his father at CNN’s Town Hall last week.

And the students of Marjory Stoneman Douglas are also recording videos and encouraging other students to do the same with the hashtag #WHATIF to encourage politicians to act on gun control and student safety: 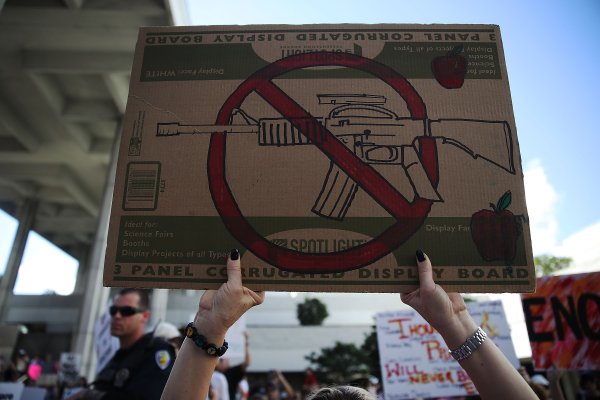 Gun Owner Goes Viral for Destroying His AR-15 After Florida School Shooting
Next Up: Editor's Pick