For the LGBT Community, Gus Kenworthy's Olympics Loss Is Still a Big Win

The moment, when it happened, felt routine to American slopestyle skier Gus Kenworthy, who along with figure skater Adam Rippon is the only openly gay male Winter Olympian to ever compete for the United States. Matthew Wilkas, Kenworthy’s boyfriend, gave Kenworthy a good-luck kiss before a qualifying run on Sunday in South Korea. “That was like a peck,” Wilkas, who wore a “USGay” t-shirt to the event, tells TIME afterwards from the bottom of the slopestyle course at the Phoenix Snow Park. “We should have made out in front of people.” Kenworthy didn’t know the TV cameras caught it, but they did: NBC beamed the kiss into living rooms across the country, setting off a blaze of social media reactions.

But once Kenworthy — who won a silver medal in slopestyle skiing at the Sochi Olympics while still in the closest — found out that NBC aired the kiss, he began to consider its importance. “That’s something that I wanted at the last Olympics, to share a kiss with my boyfriend at the bottom,” says Kenworthy. “It was something I was too scared to do for myself. To be able to do that, to give him a kiss, to have that affection broadcasted to the world is incredible. I think the only way to change perceptions, break down homophobia, break down barriers, is through representation. That’s something that I didn’t have as a kid. I definitely didn’t see a gay athlete at the Olympics kissing their boyfriend. And I think that if I had, it would have made it a lot easier for me. Hopefully it did that for other people.”

Kenworthy, who came out as gay in an ESPN The Magazine article in 2015, failed to win back-to-back medals at the Olympics. He finished 12th, dead last, in the finals, having fallen on his first two runs, and bailing out of his third run before the finish. (Oystein Braaten of Norway took the gold medal, while American Nick Goepper, the bronze medalist from Sochi, won a bronze). He battled a broken thumb and a hip injury in the lead-up to his competition, not to mention increased scrutiny after his public criticisms of Vice President Mike Pence for his record on gay rights. “He’s definitely been stressing out a lot,” says Wilkas. “The gay community looks up to him, then the people who hate him for being who he is and can’t wait to see him fail. There’s a sense of wanting to prove them wrong.”

Though Kenworthy lost on the slopes, his mere presence in PyeongChang was an important victory for the LGBT community. “Just his existence is a form of resistance,” says Kenworthy friend Tyler Oakley, an LGBT activist with a significant social media following, including almost 7.9 million YouTube subscribers. The kiss only added to his impact. “Especially when a lot of counties might not even show something like that, at a time when even his home country might have government officials that don’t celebrate that type of love, it’s important,” says Oakley. “It means something.”

Sports were a sort of final frontier for the gay community. Before Michael Sam, Jason Collins and others, athletes were reluctant to come out. So Olympians like Kenworthy and Rippon carry particular clout. “What I’ve seen is a unification, like I’ve never seen before, around these incredible out athletes,” says Oakley. “The term role model gets thrown around. I think of a possibility model for kids out there, what they can be and what’s possible for them. That is going to change lives.”

While Kenworthy scored a key victory off the snow, he seemed to take his slopestyle shortcomings in stride. “It’s all good,” he told the media afterwards. Then he walked down a small hill to meet his family (mom Pip, dad Peter, his two brothers and Wilkas) and broke down, bawling, in their arms. He could no longer hide his hurt. Months of mental fatigue — the worrying about qualifying for the Games, the sponsor obligations, the hurtful messages from the internet — came pouring out of him. “You’ve had a long week, you’re tired,” his older brother, Nick, told him, in an attempt at reassurance. “You’re a f–king champion, dude.” As the tears subsided, Kenworthy began his walk out of the snowboarding venue. And onto bigger things, for sure. 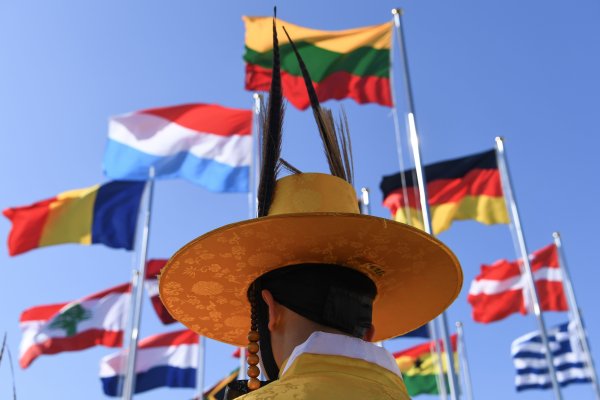 Here's What All the Olympics Country Abbreviations Mean
Next Up: Editor's Pick