Britney Spears Is a Big Fan of Gus Kenworthy and Adam Rippon. The Feeling Is Mutual

Olympic athletes do a lot to prepare for competition: train rigorously for years, get plenty of sleep beforehand (or not) and, sometimes, draw inspiration from Britney Spears — who took the time to wish U.S. freestyle skier Gus Kenworthy luck before his appearance at the 2018 PyeongChang Winter Olympic Games on Sunday.

“Gimme, gimme more on the slopes today!!” Spears tweeted at Kenworthy, hours before his slopestyle competition — which takes place Saturday night Eastern Time, when he will look to defend the slopestyle silver medal he won in Sochi.

“Oh. My. God. Was really not prepared to wake up to this. Not sure how I’m gonna ski today because I’m LITERALLY dead now but I’m gonna go that extra mile for you, Britney!” he responded.

U.S. figure skater Adam Rippon also joined in after Spears cheered him on and referenced his response to critics: “Haters are just fans in denial.” Rippon and Kenworthy are the first openly gay American athletes to compete at the Winter Olympics, and their outspoken political comments have drawn criticism from some.

“I just wanted let you know that I am a fan, I am not in denial, and that you are THE MOST FUN!! Keep making us all smile at the #WinterOlympics and good luck today,” Spears tweeted on Friday, before Rippon’s free skate.

“I could feel you on the ice with me @britneyspears,” Rippon wrote back. “I now have an OVERWHELMING desire to post Instagram fashion shows, google stock imagines of corn, and paint on the balcony of my dorm in the Olympic village. Thank you for not being in denial, LOVE YOU.”

Rippon — who has embraced the title of “America’s Sweetheart” — has drawn admiration from other celebrities, including Reese Witherspoon and Sally Field, who is now trying to set him up with her son. 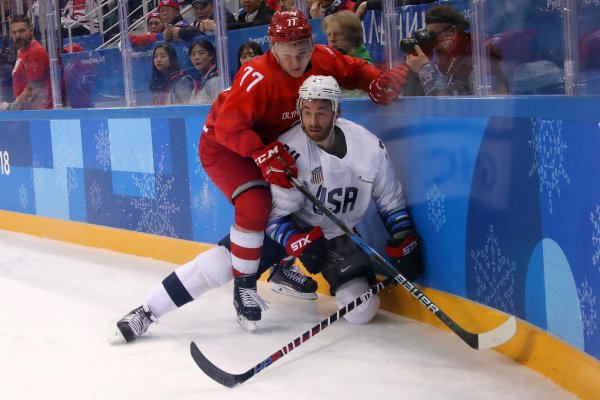 USA Vs. Russia Was About More Than Just Hockey
Next Up: Editor's Pick