USA Men's Team Vs. Russia Was About More Than Just Hockey

For American athletes at the PyeongChang Winter Olympics Games, facing off against Russia in any sport is, well, complicated. Hockey, the sport in which the United States achieved its greatest Olympic moment as a nation — the 1980 Miracle on Ice victory in Lake Placid against the Soviet Union — offers a particular chill. Geopolitical tensions envelop the ice; that Special Counsel Robert Mueller, on Friday, indicted 13 Russian nationals for their alleged interference in the 2016 U.S. presidential election only adds to the intrigue.

Throw in another wrinkle for Team USA’s preliminary round men’s hockey showdown on Saturday against Russia – actually, the Olympic Athletes from Russia – the top team in America’s group: Many people think Russia doesn’t belong at these Olympics, because of its state-sponsored doping scheme at the Sochi Games.

But Russia’s here at the PyeongChang Olympics, with conditions. For one, Russia can’t officially refer to itself by its name. Instead, the International Olympic Committee allowed Russian athletes who’ve passed drug tests compete on a team with an unsubtle name: Olympic Athletes from Russia (OAR). The team wasn’t allowed to fly its own flag during the opening ceremonies. But on the ice, the red uniforms — and hundreds of Russian fans in the stands waving flags and singing traditional songs — leave little question about Russia’s presence in PyeongChang.

The USA men’s hockey team felt it. In the final game of pool play for both teams, the Olympic Athletes from Russia (OAR) crushed the United States, 4-0, at the Gangneung Hockey Arena Saturday night. The blowout started a little more than seven minutes into the first period, when Sergei Shirokov delivered a pretty centering pass to Nikolai Prokhorkin, who punched the puck into the net to give OAR a 1-0 lead. The United States was fortunate to hold OAR to a single goal, and after Prokhorkin scored again early in the second, OAR delivered a gut punch at the end of the period when Ilya Kovalchuck, who played 11 seasons in the NHL, scored with .02 second left. That goal put the game out of reach. “You’d like to have that third one back,” says U.S. coach Tony Granato.

Going into the game, the energized crowd knew national pride was on the line. “I’m for clean sports,” says Sergei Titovskii, 36, a Russian who now works in seafood product sales in South Korea. “But there was never a reason to keep our whole team out of the Olympics.” Titovskii , who was draped in Russian flag, says he’s no fan of Vladimir Putin. But he admires Donald Trump. “He’s a tough guy,” says Titovskii. “I don’t know why Americans don’t like him more.”

As for the Mueller’s indictments on Russian election meddling? “That’s bulls—,” says Titovskii. “I don’t know how people can believe that.”

Amanda Harphan, whose husband is a U.S. Army officer stationed in South Korea, has a different view. Dressed as the Statue of Liberty, Harphan said the election indictments just raised the stakes for this game. “Don’t screw with us,” says Harphan.

Despite the geopolitical trash talk, fans of both Team USA and Russia – many of whom wore “Red Machine” or “Russia Is My Life” hats – snapped pictures together in the arena. “I’m praying for peace between the two countries,” says U.S. Air Force Major Timothy Hirten, chaplain at Osan Airbase in South Korea. “This game is a chance to use diplomacy through sports. And have a little fun.”

The players weren’t holding hands on the ice. “We don’t like each other,” says U.S. defenseman Jonathan Blum. “You can see that from the start of the puck drop.” A few brawls nearly broke out; American forward Jordan Greenway was involved in a few of the scuffles. “They were banging some bodies around out there tonight,” says Greenway. “But I thought we were too.” After the game, American coach Tony Granato admitted he was upset that the OAR team sent out its best players during a power play, up 4-0, late in the game. “I didn’t like it.”

Both on and off the ice, the U.S.-Russia rivalry remains chippy. The Americans still have a shot at a rematch, though they now have to win an extra game to qualify for the quarterfinals, while the Russians earned a bye into that round. “We’re here to do big things,” says Greenway. “I don’t see any reason why we’re not in the gold medal game.” That’s some tough talk. If the Americans somehow get there and meet Russia, however, they may need another Miracle on Ice. 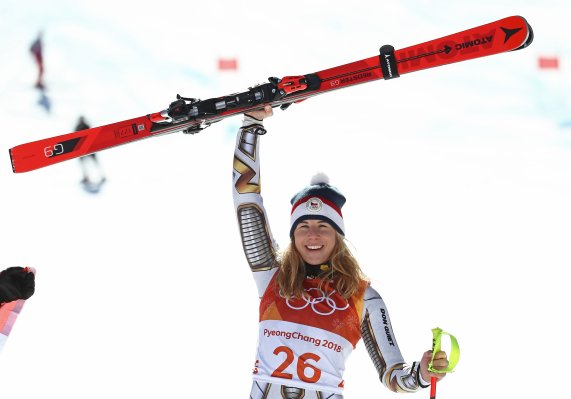 Ester Ledecka Just Won Olympic Gold in Skiing. Will She Do It Again in Snowboarding?
Next Up: Editor's Pick