'There Was Nothing I Could Lose.' Nathan Chen Redeems His Dismal Olympics and Makes Skating History

You can say what you want about the new figure skating system, but its rigid by-the-numbers scoring means even vaunted medal favorites can fall to 17th. And climb back up to fifth.

That’s exactly what the U.S.’s Nathan Chen did, orchestrating what was perhaps the greatest comeback in skating history.

Japan’s Yuzuru Hanyu repeated his Olympic feat from 2014 and skated to another men’s title, while his teammate Shoma Uno earned silver and Javier Fernandez became the first Spaniard to win an Olympic figure skating medal with the bronze.

Chen, however, made a different kind of history, on a couple of levels. Known as the Quad King for being the first skater to land five quadruple jumps in a single program, Chen raised the bar again by attempting six quadruples in his go-for-broke free program at the Olympic figure skating men’s event in Gangneung Ice Arena on Saturday, landing five of them successfully.

Chen, who was in 17th place after the short program, said he “literally had nothing to lose” going into the long program, so he opted to try six quad jumps — without even telling his coach. “It was me,” he said of the decision to try six of the most challenging jumps male skaters perform. “I didn’t even tell [coach Rafael Arutunian] I was doing that.”

Chen’s monster long program score, added to his short program marks, left him at 297.35, which kept him in first place until the fifth to last skater took the ice. Even then, China’s Jin Boyang only surpassed Chen by 0.42 points.

“I definitely did want to redeem myself after the two short programs,” says Chen, who skated poorly by missing his jumps in both the team skating event and the individual men’s short program. “And I definitely did that here. Honestly, I am human, I make mistakes. Unfortunately it happened at a really bad time.”

“His long program will be talked about forever,” says Kurt Browning, four-time world champion and three-time Olympian for Canada. Chen, in fact, won the free skate portion of the men’s event, by a comfortable 8.91 points over Hanyu, who had the second highest free skate score after a flawed program in which he stepped out of a quadruple toe loop and a triple lutz and landed four quads. Uno, too fell on his opening quad jump. “Right now [Chen] is a kid going, I just kicked in the long program, and I totally would have won this thing, man,” says Browning. But his low short program score meant he couldn’t leap to the podium unless the top skaters also faltered, and badly.

Chen admitted that while he said he would talk to his coach and training team about what to do next after his dismal short program on Friday, he actually didn’t. “I just went straight back to my bed and just lay there,” he says. “I just fell asleep, and I think that helped a lot.”

Chen also talked to his mother, who advised him to attack and fight for everything in the long program, and to remember that his performance in the short programs did not reflect who he was and what he was capable of doing.

The disastrous short program placement might have actually been a blessing for Chen in the end; with nothing to lose, the world saw what a powerful and talented skater Chen really is. In the stands, Browning, who was the first skater to land a certified quadruple jump in competition (at the 1988 world championships) could empathize with what Chen was feeling. Browning too was a gold medal favorite leading into the 1994 Olympics, but dropped to 12th after the short program. He too skated a lights-out free program and pulled himself up to fifth place. “He doesn’t even know who I am, but he and I have a lot in common,” says Browning. “Maybe some day we’ll have a long talk. Because I can help him move forward.”

Paul Wylie, Olympic silver medalist, says Chen’s feat is a reflection of the stratospheric levels to which men’s skating is reaching. “He’s 18 and he’s grown up with quad jumps,” Wylie says. “These are his triple [jumps]. In his mind the sky is the limit; he’s thinking I’m 18 and maybe I’ll do a quadruple axel, or maybe I’ll do a quint.”

Chen received credit for five of the quad jumps, but stumbled on landing the quad flip and received some deductions for placing his hands on the ice. “It was risky,” he says of attempting the record-breaking number of quad jumps, “It was hard, but there was nothing I could lose at that point. I just wanted to put them out there and see what happened.”

Chen wasn’t the only skater to make history. Teammate Vincent Zhou, who finished sixth, became the first skater to land a quad lutz, the most challenging quad jump, at the Olympics. Hanyu is only the second skater to repeat as Olympic champion, after the U.S.’s Dick Button in 1948 and 1952. And Fernandez earned his country’s first ever medal in figure skating.

For Hanyu, the title didn’t come easily. He injured his ankle after practicing a quad jump in November, and has not competed since then. “I just thought, ‘skate,’” he says of his comeback. “Just think about skating all day, all week, every day. And I trusted.”

For the U.S. men, the competition was an unexpected ride of ups and downs. While Chen struggled in the short program, teammate Adam Rippon impressed with two clean programs and finished 10th, and also laid down an impressive skate in the team event, which helped to earn the U.S. team a bronze. “To complete three clean programs, and have a top 10 finish in the individual event and a bronze medal, this is sort of like a dream Olympic Games for me,” says Rippon, whose mother, brother and sister were in the arena waving an American flag. His huge personality while competing, and his embrace of his role as a voice for LGBTQ youth helped to earn him legions of new fans, who applauded his performances and his bravery in competing as the first openly gay athlete at a Winter Olympics.

The youngest member of the 2018 U.S. Olympic team, Zhou also had a commendable debut. Not only did he become the first skater to land a quad lutz at the Olympics (in the short program), but he also tried five quads in his free program and ended up in sixth.

If there was anything the men’s Olympic skating event proved, it was that the high level of technical skill required to compete can be both a blessing and a curse. Because the points system rewards high value tricks like quad jumps, skating officials are discussing whether they cap the number of quadruple jumps they allow in a program. “It will be interesting to see what happens after the Olympics,” says Wylie. “Since the event has been so driven by the technical elements will there be a rejiggering of the artistic mark and strategies to get more artistic performances?”

Chen, for one, managed to turn the technical monkey that plagued his short program into a gift in his free skate. He wouldn’t admit it at first, but Chen says the pressure of competing at his first Games might have gotten to him initially. “As much as I tried to deny it, I think I did feel the pressure a lot before the short program, especially thinking about medals and placement and things that are completely out of my control. That tightened me up, and I was really cautious out on the ice, which is not the right way to skate. Being in such a low placement going into the long program, I allowed myself to completely forget about expectations, and allowed myself to be myself.”

Which turns out to be a pretty good comeback artist. 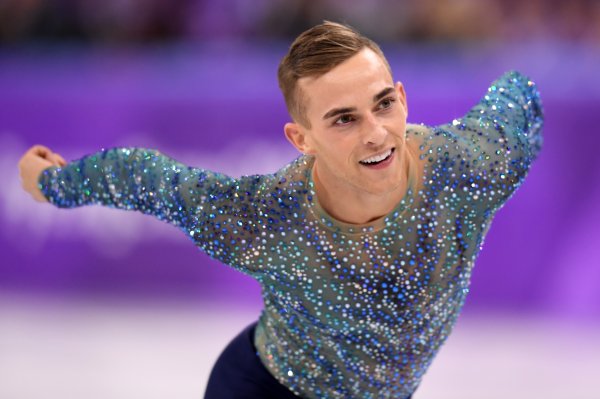 'He's the Winner of the Olympics.' Adam Rippon Stole Everyone's Hearts During the Olympics
Next Up: Editor's Pick