Red Gerard is tired. Last weekend he won a gold medal at the 2018 Winter Olympic Games in PyeongChang. This week he’s all over the news talking about it. And next week, he’ll be back in South Korea to compete in the men’s big air snowboarding event.

The 17-year-old was the first American to win a gold medal at the 2018 Olympic Games and he’s become something of a legend after cameras captured him dropping the f-bomb while celebrating his slopestyle win. Fans adore his carefree approach to race day — news reports described how he binge-watched Brooklyn Nine-Nine the night before his first event, woke up late and lost his jacket, and then nailed it on the mountain.

Gerard is actually that calm about competing. “I mean I kind of just treat every contest like a normal day,” he explained to TIME in a video interview in between his Olympic events.

As for what’s next, he stifled a yawn and said, ‘I just want to hang out. I’m excited for all this media stuff to be over and just start snowboarding again.” He’s also looking forward to eating some burritos. 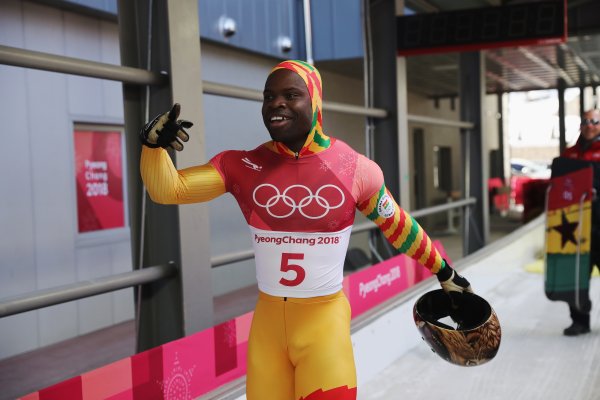 Last Place Will Not Stop Ghana's First Skeleton Olympian From Dancing His Celebratory Dance
Next Up: Editor's Pick