President Trump's New Defense on Russia Contradicts His Old One

President Donald Trump took a new line of defense in light of the indictment Friday of 13 Russians and three Russian entities on charges of meddling in the 2016 presidential election.

But his new argument contradicts his old one — and isn’t supported by the evidence he cites.

In the past, Trump has cast doubt on Russian meddling, regularly calling it a “hoax” despite widespread agreement in the American intelligence community. But on Friday he and the White House acknowledged the efforts, said they predated his campaign, claimed they did not affect the election and said his campaign was not involved.

The White House offered similar sentiments in its official statement, issued just minutes after Trump’s tweet, noting that the Administration “is glad to see the Special Counsel’s investigation further indicates — that there was NO COLLUSION between the Trump campaign and Russia and that the outcome of the election was not changed or affected.”

It’s true that the indictment does not say that Russian efforts to interfere with the election had an effect, and no Trump campaign officials are named, as was stated by the top Justice Department official whom Mueller reports to at a news conference.

But that’s not the same as saying it didn’t happen, either. Future indictments could include charges against Americans if Mueller’s team turns up evidence that they knowingly participated, and Trump’s campaign head, Paul Manafort, and his top deputy, Rick Gates, have already been charged with conspiracy to launder money and making false statements to investigators, among other things.

It’s also unlikely that an indictment of this sort would pass judgment on whether the election was affected — a claim more likely to be adjudicated by political scientists than federal prosecutors.

Overall, the charging documents paint a picture of a Russian effort that tried to tear down Trump’s rivals, including not just Hillary Clinton but also Republican primary candidates Ted Cruz and Marco Rubio; boost candidates like Bernie Sanders and Jill Stein who would have the effect of draining Democratic support from Clinton; and discourage minority voters who tend to vote Democratic.

The indictment also indicates that the Trump campaign may have had contact with the Russians, albeit unwittingly.

“Some Defendants, posing as U.S. persons and without revealing their Russian association, communicated with unwitting individuals associated with the Trump Campaign and with other political activists to seek to coordinate political activities,” it says.

Trump’s new argument is a significant change from the arguments he’s used on Russian meddling and the hacking of the Democratic National Committee’s emails (which was not included in these indictments).

In the past, Trump has argued that the DNC leaked its own emails as a distraction, speculated that China or “someone sitting on their bed that weighs 400 pounds” hacked the party, claimed that Democrats were pushing the Russian meddling argument to make up for the fact that they lost, called the intelligence officials who have said Russia interfered “political hacks,” said that he believes Russian President Vladimir Putin’s outright denials of meddling, and derided Russian meddling as a “hoax,” “fake news” and a “made-up story.”

The indictment undercuts those arguments, as did the January 2017 assessment from top U.S. intelligence agencies that Russia interfered in the election, the admission of top executives from Facebook, Google and Twitter that they were used for Russian misinformation, the acknowledgement of Russian meddling by Trump’s handpicked intelligence agency heads and the comments of everyone from former President George W. Bush to Republican Sen. Richard Burr.

In the indictment, federal prosecutors go into detail on Russian plans to “sow discord” in the U.S. political system, including buying political ads on YouTube, Facebook and Twitter to spread disinformation; paying people to perform certain tasks at political rallies; and organizing flash mobs and other real-world events. The Russians involved in the operation posed as U.S. citizens and created Facebook pages and Twitter handles designed to attract a domestic following, prosecutors say.

The operation, which had a budget of $1.25 million per month for the U.S. and other countries, was allegedly funded by Yevgeniy Viktorovich Prigozhin, a Russian businessman who the country’s media has reportedly dubbed “Putin’s chef” because his businesses cater meetings with the Russian President and foreign diplomats.

Overall, the indictment is filled with concrete, specific details that make it hard for the president to keep calling allegations of Russian meddling a “hoax.” But the jury is still out on Trump’s new line of defense. 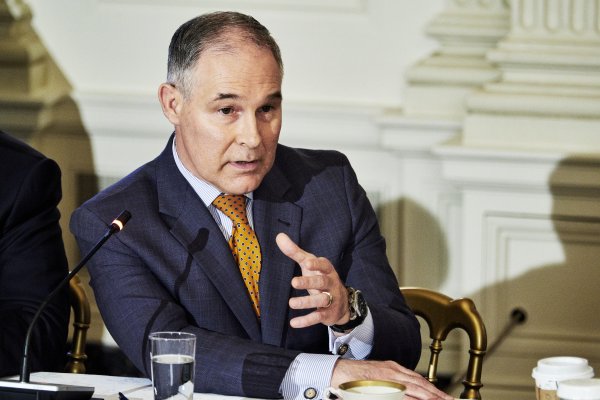