Why We Shouldn't Always Expel Kids Like Nikolas Cruz

FORT LAUDERDALE, FL - FEB. 15: Nikolas Cruz, 19, a former student at Marjory Stoneman Douglas High School in Parkland, Fla., where he allegedly killed 17 people, is seen on a closed circuit television screen during a bond hearing. (Photo by Susan Stocker - Pool/Getty Images)
Pool—Getty Images
Ideas
By Ross Greene
Greene is founding director of the non-profit Lives in the Balance, author of the books The Explosive Child, Lost at School and Raising Human Beings, and a creator behind the forthcoming documentary The Kids We Lose.

I’ve never met Nikolas Cruz, who carried out the horrific shooting in Parkland, Florida, on Wednesday. Nor have I met those who tried to help him through the years. But those of us who work in mental health, schools, law enforcement and treatment facilities are likely to find what we’ve read about his path toward tragedy to be eerily familiar. He was a “loner.” He talked about guns and knives. He was expelled. We know these kids. The ones who have difficulty meeting behavioral expectations at home and school, and often have difficulty meeting academic expectations as well. The ones on the social margins, who have difficulty being a part of the social fabric of a school. The kids who are bullied, ostracized. Their parents and teachers are often at a loss for how to help them, and not for lack of trying. These are the kids who end up disenfranchised, marginalized and alienated. My colleagues in schools tell me there have never been more kids in this kind of trouble. They tell me they’ve never seen such extreme behaviors in so many kids at such young ages.

It is tempting to focus on the final act of Cruz’ path to tragedy, and — in a rational world, this should go without saying — on the insanity that allowed him to acquire an AR-15 assault rifle. But if we want to stop the senseless tragedies, we need to do something about the factors that lead kids to want an assault rifle in the first place.

High-stakes testing hasn’t helped. Classroom teachers have always been among the most important socialization agents in our society. Even if a student was going home to a dysfunctional family, there was still at least a glimmer of hope for that kid if he or she was successful at school and had positive relationships with his or her teachers. But if you tell classroom teachers that their job performance and job security are going to be based solely on how their students perform on high-stakes tests, then classroom teachers are going to be pushed toward focusing solely on how their students perform on high-stakes tests. Standards are a wonderful thing, but students who need a certain kind of attention lose out when standards become an obsession. I’ve had many classroom teachers and administrators tell me that a lot of the humanity has been taken out of their jobs. We need to put the humanity back in.

Zero tolerance policies haven’t helped (in fact, the Zero Tolerance Task Force of the American Psychological Association tells us that zero tolerance policies have made things worse). Such policies focus exclusively on a student’s challenging behavior and apply an algorithm of punitive, adult-imposed consequences for those behaviors. But challenging behavior is simply a signal. It communicates that a kid is struggling to meet certain social, behavioral and academic expectations. If we only focus on the signals — the behaviors — we overlook the problems that are causing those behaviors. We are far more productive when we’re trying to solve those problems than we are when we’re simply modifying the behaviors caused by those problems. Punitive interventions don’t solve those problems. Detentions don’t; nor do suspensions, expulsions or paddling. Nor does arresting a kid at school and punting his problems to the courts.

And yet, depending on the size of a school, there is often a small number of students accounting for the vast majority of discipline referrals in each building. Public schools in the U.S. dole out about 100,000 expulsions, 3 million out-of-school suspensions, 3 million in-school suspensions, and millions of detentions every school year. The fact that these numbers are so high and that these kids are accessing the school discipline program so frequently is proof that the school discipline program isn’t working. There are a variety of non-punitive, non-adversarial interventions that can change that; yet in many schools, those interventions aren’t being applied.

There are programs that have been implemented in schools that have transformed school culture and the ways in which educators respond to and help kids with social, emotional, and behavioral challenges. Models aimed at involving kids in solving the problems that are causing their challenging behavior have significantly reduced or eliminated detention and suspension and helped kids remain in their general education classrooms when they would have otherwise been placed in special programs outside the mainstream. Models that are effective at teaching kids the social skills they are lacking. Models aimed at facilitating classroom communities in which students learn to help one another and embrace individual differences. The technologies exist. We need to use them.

Some educators still cling to the mentality that all the problems of society have been unfairly dumped on schools and that schools should be focused primarily on academics. That mentality is obsolete, and it doesn’t help us respond effectively to the real problems facing our kids. But, in an era of significant education budget cuts and overcrowded classrooms, are we providing educators with the support they need to be responsive? Many school systems have no choice but to operate on a “waiting to fail” model in which vulnerable students don’t receive the help they need until their difficulties become much harder to address.

Finally, those in the trenches are well aware of the very poor communication that frequently exists between the different caregivers involved in trying to help kids with behavioral problems. Social service agencies, the police, the courts, schools and parents frequently don’t share information with one another, often prevented from doing so by the bounds of confidentiality. Thus, the left hand frequently has no idea what the right hand is doing. When the left hand doesn’t know what the right hand is doing, kids slip through the cracks.

Cruz’ journey toward a lifetime behind bars or the death penalty has entered its final chapter. The anguish of those so tragically and needlessly affected by his actions is only beginning. Cruz has provided us with another stark reminder of the fact that when we lose kids like him, we all lose. 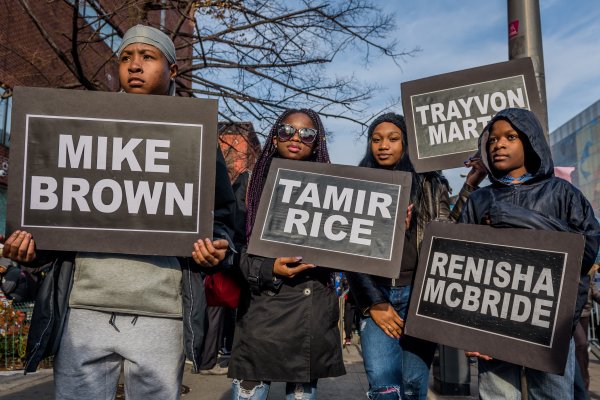 America Is Losing the Real Meaning of Black History Month
Next Up: Editor's Pick