It’s a bright but perilously cold February day in England and I’m shivering at the back of an orderly queue made up predominantly of Chinese tourists. A security guard is keeping an eye on the crowd to ensure the peace is kept, and those standing in line talk in excited whispers, arms bearing oversized shopping bags, fold-up maps and the hands of snotty, bored-looking toddlers.

But I’m not attempting to catch a glimpse of Harry and Meghan on a royal visit, admiring the neo-gothic architecture of Big Ben and the Houses of Parliament, or waiting for a table for afternoon tea at the elegant Claridge’s Hotel in Mayfair. In fact, I’m standing in line to enter an enormous branch of the designer store Prada located in Bicester Village — a luxury goods and clothing outlet in Oxfordshire, a county in central southern England that’s precisely 46 minutes by train from London’s Marylebone station. The Village, which boasts more than 160 stores, known there as “boutiques,” is the second most-visited destination in England by Chinese tourists, second only to Buckingham Palace.

Queues outside the Prada store in Bicester Village, Feb. 16 2018.

When the Bicester Village outlet opened in 1995, a sprawling outdoor mall was a sight far more more commonly seen in America than in Britain. But during the 22 years it has been open, the kilometer-long Village has become the ultimate destination for shoppers both from and visiting the U.K. Bicester now attracts more than 6.3 million customers a year, who spend four hours on average pursuing the mainly designer stores (think Gucci, Mulberry, Kate Spade and so on), each offering discounts of up to 60% off typical prices.

It’s those low prices, as well as the Village’s proximity to both London and Oxford (a popular tourist destination due in part to the prestigious university located there), which attracts Chinese tourists in great numbers to the Disneyland-esque site each year. Bicester’s popularity with Chinese visitors has even led its parent company to open two similar discount shopping outlets in eastern China.

“Chinese people read about Bicester Village online and decide they want to come here to shop,” said Caroline, a 30-year-old student from Beijing, when asked about the shopping outlet’s appeal. “They think the goods are better quality and cheaper than in other places, even though they don’t really know that for sure.”

Bicester Village was one of many places in the U.K. to pull out the stops on Feb. 16, the start of the Chinese New Year. A crowd of more than 100 people gathered in the outlet’s center to observe a traditional Chinese lion dance performance and eye-dotting ceremony. Guests of honor included Bicester’s Town Mayor, the High Sheriff of Oxfordshire and Minister Xu Jin, from the Embassy of the People’s Republic of China.

“One million tourists come to the U.K. from China and spend lots of money here, and 100% of Chinese travelers come to Bicester Village,” Xu Jin told the crowd in a speech with what was likely a touch of hyperbole. He joked that Chinese tourists are treated better in Bicester than at Heathrow Airport’s Duty Free shop, a comment which received a roaring laugh upon its translation into Mandarin.

According to figures from the British tourist board, Chinese tourists are some of the U.K.’s highest spenders, spending on average three times more than the standard visitor. Chinese spending in the U.K. reached $127 million between January to March 2017, up from $100 million year-over-year. That spending has risen concurrently with the British pound’s falloff following the summer 2016 vote for “Brexit,” Britain’s departure from the European Union.

And certainly all the Chinese tourists I spoke with headed to Bicester Village had one thing on their mind: Some serious shopping. Guangzhou-based Elaine, 44, and her friend Joyce, also 44, told me they were spending their entire Spring Festival (the week-long holiday period that surrounds Chinese New Year) in the U.K., checking out stores in London, Oxford and, of course, Bicester.

“I have been to the U.K. three or four times and I think it is very beautiful — the air is fresher and I like the shopping,” said Elaine, who sat down with me in a Bicester cafe while she took a break from browsing. “Food and transport is more expensive in England [than in Guangzhou], but shopping is cheaper — maybe around 40% cheaper.”

Fellow shopper Joe, from Shenyang, a city in northeastern China, agreed with Elaine. “You can get designer clothes for about 20% cheaper and high street clothes for 40% cheaper here than in China,” said the 34-year-old, who runs a small electronics company. “Today I have bought clothes and bags from Balenciaga. I didn’t bring a list with me, I just bought stuff I need.”

Hong Kong-based friends Agnes and Candy, both in their 50s, had more direction than Joe when I spoke to them as they waited in Marylebone Station for their train to Bicester. “I want to buy a trench coat from Burberry, as well as a scarf,” said Candy. “I also want to visit Jo Malone.”

Even without its elaborate Chinese New Year presentation, it’s clear that Bicester Village makes an effort to cater to its Chinese big spenders. Signs in Mandarin can be found everywhere from the nearby Marylebone train station to the Bicester branch of popular sandwich chain Pret a Manger. The Bicester website is available in Chinese, with special discounts available for the Chinese New Year period, and a Chinese-style noodle stand sits right at the Village center, the menu available in both Mandarin and English.

It’s not difficult to understand why. “Chinese people, Chinese tourists spend the most money in this Village and the shopping areas,” said Xu Jin in his New Year speech. “I hope everybody today you spend your money and choose things you like,” he added. “And we hope that Bicester Village in the future can get much more popular and also I hope Chinese people enjoy their shopping today.” It certainly sounds like they will. 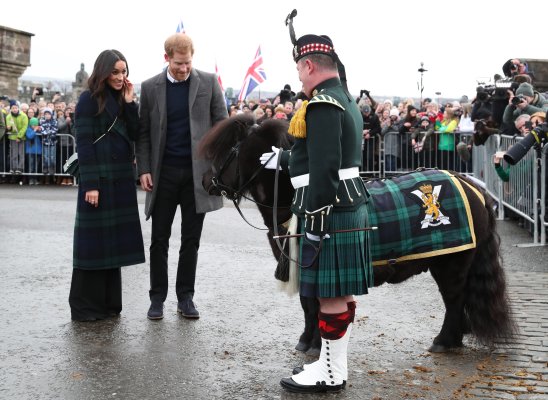 Prince Harry Was Bitten by a Pony During His Trip to Scotland
Next Up: Editor's Pick