Leading up to the Olympic figure skating men’s event, Nathan Chen was a gold medal favorite. Chen’s teammate Adam Rippon, who does not perform some of the more difficult jumps that Chen does, wasn’t considered a true threat for a medal in the olympic skating men’s event, but managed to endear himself to the world with his exuberant — and clean — skate.

Now Rippon sits ahead of Chen after the Olympic figure skating men’s short program. Rippon’s error-free skate, albeit minus the quad jumps, landed him in seventh place while teammate Vincent Zhou is in 12th. Chen, who made mistakes on all of his jumps, is currently 17th. That means he will skate in the second group of six skaters in the free program tomorrow, since the skating order is reversed from the rankings after the short program.

Chen, who is competing in his first Olympics, is having a tough time so far. First there was his error-filled short program in the team skating event earlier this week, in which he botched all of his jumps. Then he did the same in the men’s short program.

“It was rough. Nothing really clicked together,” he says. “I did all the right stuff going into it, so it should have been different. But stuff happens. I’ll try to take it for what it is and move on.”

Chen was undefeated this season, and is the first man to land five quadruple jumps in a single program (he did it to win his first U.S. national title in the long program in 2017). To date, he is the only one to beat reigning Olympic champion Yuzuru Hanyu from Japan, and since Hanyu injured his ankle last November and has not competed since, Chen was almost assured a spot on the podium, if not gold.

That was before the short program.

Seconds into his routine, Chen fell on his quadruple jump combination, which meant he couldn’t complete the second jump in the series. He stumbled out of the landing on both his next quad jump and the triple axel that followed. Those mistakes prevented him from tacking on another jump to fulfill the requirement that one jump series be a combination, and that cost him in execution points. With the automatic deduction of 1.0 point for the fall, his score was a stunningly low 82.27.

That put him behind both teammates, Rippon and Vincent Zhou, who became the first man to land a quadruple lutz on Olympic ice. Zhou under rotated some jumps, however, which lowered his score, and his youth and inexperience prompted the judges to give him lower marks on the more subjective elements such as performance, skating skills and interpretation of the music.

Rippon did not have that problem, enticing the crowd with his lively routine to the dance club song “Let Me Think About It.” By the time he completed his final spin, he had already won over the crowd, and collapsed to the ice in relief.

Chen couldn’t explain all the errors he made in the short program; he easily whipped off the same quadruple jumps and triple axels minutes before he competed during the warm up. He said he was not sick or injured, and that the pressure of skating after Hanyu, who leads the competition after a dazzling skate in which he landed two quads and received full credit for them, was not a factor. “I’ve skated after him before and skated well, obviously that didn’t happen here and I don’t think that played too much of a role,” he said. Hanyu’s fans practically filled the arena and showered the ice with Winnie the Pooh bears. Hanyu used to use a Pooh tissue box cover at the rink for good luck, and fans have rained down ursine dolls ever since. Chen had to wait a few moments before taking the ice while the bears were picked up.

Hanyu has been the biggest question mark entering the Games; the 23-year-old injured his ankle while training a quadruple lutz jump in practice during a competition last winter and hasn’t competed since November. Japanese media flocked to his first practices at the Gangneung Ice Arena, where he simply checked off single jumps on the first day and eventually added two quad jumps during his next full training session. Japanese media have been reading into every stroke Hanyu makes on the ice, and dutifully reporting every move at the request of his legions of fans.

“I just felt happy to skate, I just felt satisfied with every element,” he said. “I couldn’t perform for the last three months so I am very happy to be back.”

Hanyu is hoping to become the first man to repeat as Olympic men’s skating champion since the U.S.’s Dick Button won back to back golds in 1948 and 1952.

Javier Fernandez of Spain, a two-time world champion who finished fourth at the 2014 Sochi Olympics, is hoping to become the first Spaniard to win a skating medal. He’s well on his way after skating a precise and delightful program as Charlie Chaplin — and landing two quadruple jumps — to finish in second, while Hanyu’s teammate Shoma Uno also landed two quad jumps to end up in third place.

Chen’s arsenal of quadruple jumps sets him apart from most of the competition; quadruple jumps are worth far more in points than triples are, and it’s easy for Chen to add up points and pull away from the field — if he lands them cleanly.

The disastrous short program prompted tweets of encouragement for Chen, including from Olympian Scott Hamilton. “I respect you. I admire you. I believe in you. Today was a difficult day. Tomorrow is up to you!”

But even if Chen skates a dazzling long program peppered with multiple quad jumps, it’s numerically impossible for him to climb from 17th place into medal contention — unless most of his higher-ranking competitors all come down with the norovirus. “I’ve never been in this position before so I don’t really know exactly what to do,” he says.

Even before the men’s short began, Olympian and silver medalist Paul Wylie questioned the fluidity and uncertainty of so much of today’s Olympic athletes’ schedules. Chen has said he regularly changes the elements of his program, switching jumps depending on how he is feeling and whether he needs to perform the more challenging ones to game a competition. “I am not a fan of the ultra fluidity of the planned program content,” Wylie said. “Nathan is dealing with a lot of variables. The other variable is Nathan is always talking about his boots; he’s got three different pairs of boots. And he has been going away [from Gangneung] to practice. So he’s thinking, where am I practicing today. I’m not sure those question marks are really what you need in the Olympics.”

Maybe what Chen needs is some of teammate Rippon’s infectious exuberance. “I’m able to go out in the individual men’s event and show the world I am a cutthroat competitor and that I’m an awesome skater,” Rippon says. “And I want to show why everyone should be involved in skating because it is something that has brought me so much joy, and can bring a lot of other people a lot of joy as well.” 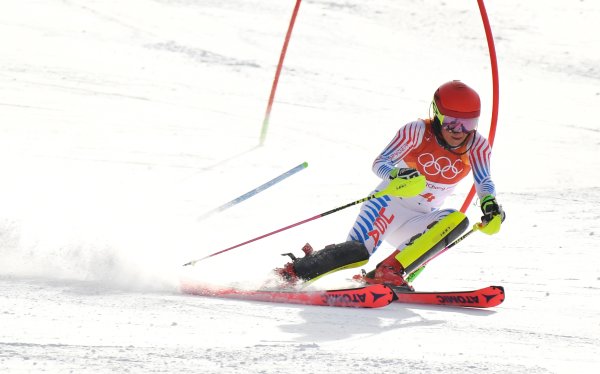