Here's How Much the NRA Has Given to Florida Lawmakers

Florida lawmakers who received donations from the National Rifle Association came under scrutiny after Wednesday’s high school shooting in Parkland.

After 17 people were killed when alleged shooter Nikolas Cruz, open fire on Marjory Stoneman Douglas High School, many social media users highlighted how much money members of Congress have received from the gun rights group.

In the 2016 election cycle, 19 federal election candidates in Florida races received more than $40,000 from the NRA’s Political Victory Fund, the Political Action Committee, according to the Center for Responsive Politics. Florida Sen. Marco Rubio, who ran for both the Presidency and the Senate, raked in the highest donation, receiving $9,900. As a PAC, the NRA can give up to $10,000 per candidate in an election cycle, $5000 for a primary election and $5000 for a general. Rubio also received an A+ rating from the NRA.

Florida has relatively relaxed gun laws, which could have eased the path for this shooting; no permit is required to purchase a firearm or handgun, according to the NRA, and there is requirement to register these weapons, although a permit is necessary to carry a handgun. In 2016, the Giffords Law Center to Prevent Gun Violence gave Florida an “F” on the stringency of its gun laws.

These laws are drafted by state legislatures—not Congressmen and Senators—and signed by the Governor, in this case Rick Scott. Scott who is strongly considering a Senate run to challenge Democratic incumbent Bill Nelson, is like Rubio, a favorite among the NRA, who noted in 2014 that he had signed “more pro-gun bills into law — in one term — than any other Governor in Florida history.” Nelson and Scott have contrasting ratings from the NRA: Nelson has an F and Scott has an A+.

When asked Wednesday evening about gun control laws following the shooting, Scott said there would be a time for those conversations in the future. He was also somewhat evasive when asked why a teenager was able to have an AR-15 rifle, saying an investigation was underway and it would be hard to determine a response without those facts.

Correction: The original version of this story misstated the amount of money candidates for federal political office from Florida received from the National Rifle Association in 2016. They received more than $40,000. They did not receive $834,165, which was the total amount contributed by the NRA to federal candidates during the cycle. 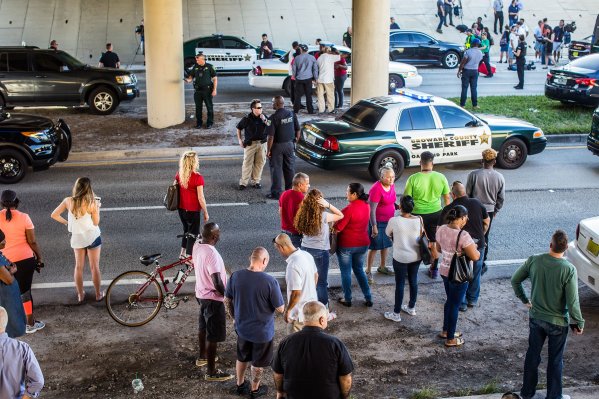