The Jamaican women’s bobsled team has been on a long journey to the PyeongChang Winter Olympics — and that journey just got even more daunting after their coach resigned on Wednesday. There also appears to be a disagreement about the sled, following her resignation.

The dispute is between coach Sandra Kiriasis, a 2006 gold medalist from Germany, and the Jamaican Bobsled and Skeleton Federation. Kiriasis wrote that she was demoted from her role as driver coach. She added: “Without giving any reasons, I was told out of the blue that with immediate effect, I should work only as a track and performance analyst, would have to leave the Olympic village, would lose my accreditation as part of the Jamaican team and was not supposed to have any more contact with the athletes, etc,” in a Facebook post.

The JBSF has a different perspective. “The lady was a hugely destructive force on the team,” JBSF President Christian Stokes told Reuters.

Instead of accepting the downgrade — which Kiriasis, she elected to bow out of the team entirely. And since she maintains that she’s ultimately responsible for the sled, the BBC reports that she wants payment for it on her way out.

The Jamaican team is slated to compete in their first heats next week, with training getting under way over the weekend. This is the first time that the Jamaican women have fielded a team ever, following in the footsteps of the iconic men’s team, who made their debut back in 1988 on the winter stage (and inspired the movie Cool Runnings). But it remains to be seen if this year’s duo of Jazmine Fenlator-Victorian and Carrie Russell will have the equipment they need to continue making history.

The JBSF said in a statement they were “disappointed” in her decision but insisted that her departure “will not impact JBSF or its athletes’ performance.” A team spokesperson told the AFP that other teams have offered assistance in filling their equipment gaps.

Kiriasis, meanwhile, maintains that it’s on the powers that be to fix the problem. “The athletes have told me they don’t understand why this has happened as they have no problem with me and we have a good relationship,” she said. 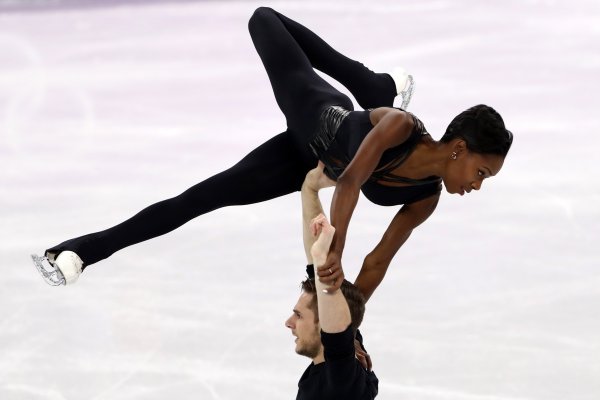 The Internet Is Living for This French Figure Skating Pair's Heavy Metal Performance
Next Up: Editor's Pick