Why the USA vs. Canada Women's Hockey Rivalry Isn't Over Yet in PyeongChang

Canada beat Team USA in women’s hockey 2-1 at the 2018 PyeongChang Winter Olympics on Wednesday in a hard-fought and long-awaited rematch of their 2014 gold medal Olympic game.

But that doesn’t mean the the USA women’s hockey team is out of the running in South Korea. Because of the Olympic tournament’s structure, the two women’s hockey rivals might still find themselves playing one another for a gold medal once again.

There are two groups of women’s hockey teams in the 2018 Olympics: Group A and Group B. They have four teams each. The highest ranked teams — Canada, the U.S., Finland and the Olympic Athletes From Russia (OAR) — are in Group A, while the next four highest-ranked teams — Switzerland, Sweden, Japan and the combined Korea team — are in Group B.

Now that the group stage is done, the two best-seeded teams from Group A got automatically moved into the semifinals, which will be the second round of the playoff stage. Team USA and Canada both received those honors this year.

Canada celebrates after defeating the United States 2-1 during the Women's Ice Hockey Preliminary Round Group A game on day six of the PyeongChang 2018 Winter Olympic Games at Kwandong Hockey Centre on February 15, 2018 in Gangneung, South Korea.
Maddie Meyer—Getty Images

That means Team USA and Canada can entirely skip the next round of games, the quarterfinals. For those games, the bottom two teams from Group A are getting matched up against the top two teams from Group B. So for the semifinals, we’ll get OAR (Russia) vs. Switzerland, and Finland vs. Sweden. The winner of the OAR vs. Switzerland game will go on to face Canada, while the victor of Finland vs. Sweden will be matched up against Team USA in the semifinals.

The winners of those two games will then move on to play for a gold medal. The loser of that final game will get the silver medal, while the two teams that lost in the semifinals will play one another for bronze. (The loser of that game, sadly for them, goes home empty-handed.)

What all that means is this: if Team USA and Canada both win their semifinal games, they’ll get matched up once again in the gold medal game — and their rivalry will spark what will likely be yet another fantastic 60-plus minutes of hockey. Given the lackluster performance of the Team USA men’s hockey team so far (attributable in part to the absence of NHL players), the women’s team is America’s best shot at Olympic hockey glory this year. 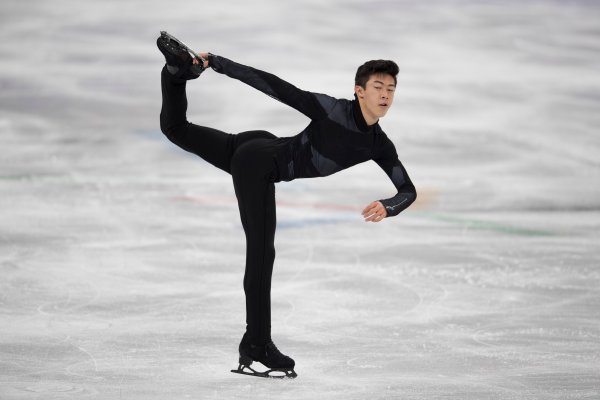 Skating Sensation Nathan Chen Begins His Quest for Gold in the Men’s Short Program Tonight. Here’s What to Watch For
Next Up: Editor's Pick