Every February, the nation’s top intelligence officials appear in public on Capitol Hill to brief Americans on the biggest global threats facing the country. This year their testimony hit closer to home: two miles down Pennsylvania Avenue in the West Wing of the White House. Nearly 13 months into Donald Trump’s presidency, dozens of his advisers reportedly still hold only temporary security clearances. At least two of the most senior aides have had access to the nation’s highest secrets, including Rob Porter, who resigned on Feb. 7 amid allegations of domestic abuse, which he denies.

That, says Trump’s own intelligence chief, is a problem. “The system is broken,” declared Dan Coats, director of national intelligence, during congressional testimony on Feb. 13. For people working in the government on interim security clearances, Coats said, “access has to be limited in terms of the kind of information they can be in the position to receive.” To make matters worse, Trump’s handpicked FBI director, Chris Wray, testified at the same panel that the White House had known about Porter’s problems for months.

The scandal threatened to topple Trump’s chief of staff, John Kelly, who defended Porter’s character. On Feb. 14, the GOP-led House Oversight Committee announced that it would open an investigation into the matter, and a senior National Economic Council official who couldn’t obtain a permanent security clearance reportedly resigned. Most important, the episode revealed a striking carelessness by the Administration of a President who regularly called for the jailing of Democratic presidential candidate Hillary Clinton for her alleged mishandling of classified information while Secretary of State.

Porter’s resignation put a long-overlooked issue in the spotlight. The allegations of abuse had delayed completion of his background check; after a year spent working in the White House as staff secretary–a vital role that involves screening every paper that reaches the President’s desk–he was still operating with an interim security clearance. Among the dozens of other staffers without permanent clearance is Trump’s son-in-law and senior adviser Jared Kushner, who reportedly has access to the top-secret Presidential Daily Brief.

The White House response to the Porter revelations only made matters worse. One official after another has failed to clarify the scope of the security clearance problem or how long key staffers had known about it. “There are a lot of officials coming in with the new Administration,” principal deputy press secretary Raj Shah said on Feb. 8, “and a lot of individuals coming in have an interim clearance.” But that, say GOP White House veterans, is misleading. Working in the White House for a year without permanent clearance would be “on the outer edge of what’s normal,” says Timothy Flanigan, White House deputy counsel under President George W. Bush. Wray testified that the FBI had been in contact with the White House about Porter’s situation last March, July and November, then again in January and February, and that the agency had completed its work on Porter last month.

If there are others working at the highest levels of government without a final okay from the FBI and the White House personnel security office, that could put classified information at risk. One of Porter’s ex-wives, for example, says she told the FBI he could be subject to blackmail because of his history of abuse. Senior staffers from previous Administrations say the Porter mess is indicative of a President whose approach to running government has been to throw out the rule book. “There is a different level of tolerance of risk by the Trump White House in terms of the people that the President wishes to employ,” says Laura Terrell, an attorney who vetted security-clearance applications in George W. Bush’s Administration. “That’s the bottom line.”

–With reporting by ALANA ABRAMSON 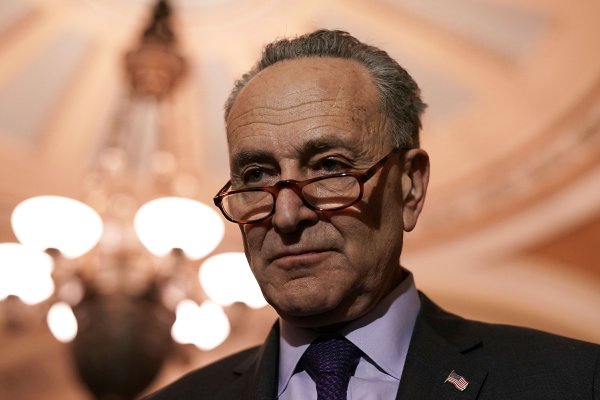 Why Chuck Schumer Can't Win on Immigration
Next Up: Editor's Pick