When I was German: Remembering the Berlin Wall then and now

The first time I left Berlin I was a very small German person with an American mother, a German father and a very odd accent in English. I sounded like I’d been raised by 19th century nuns, or Jackie Kennedy. (This is what happens when you learn a language in a vacuum.)

After a year of American kindergarten, I didn’t remember much about Germany except for the pink marzipan piglets they sold in pastry shops and my babysitter Gerde. She was a capacious woman whom you could hide behind or burrow into. Gerde spoiled me, and I adored her. She spoke in Berliner slang, and her cheek was pitted with bits of glass from the war. Some of her family ended up on the east side of the Wall. The division was random that way.

When I returned to Berlin two decades later, East German guards were sitting in the sunshine at folding tables, laconically checking passports near what was left of the Wall. My sister and I were not long out of college, but the soldiers looked even younger. I gave one guy what was probably the equivalent of his monthly salary for a gray military cap with the National People’s Army emblem of a gold hammer and compass. I don’t know if the hat meant something to him, but later I was ashamed to have bought his history like a trinket.

We didn’t see Gerde and her daughters on that trip. I don’t remember now why we didn’t try to find her. We were probably too busy rooting around in the stark cafés and bars of the East, which, like all remnants of the Soviet empire, were fascinating to Americans. (West Berliners weren’t quite so enchanted.)

Earlier this month I finally made it back for a visit and the cab driver told me it was “Circle Day,” or Kreistag. The Wall had been down for as long as it had divided Berliners: 10,316 days. The city had come around to itself. Berlin wears its history like a quilt, with art and tragedy stitched together. Cobblestones trace the Wall’s path across the belly of the city past the Memorial to the Murdered Jews of Europe. The thousands of cherry trees Japan sent to commemorate reunification have grown thick and tall. Glossy buildings sit next to ones pockmarked with bullet holes. And backyard gardens still give up shrapnel and other bits of the past century.

Gerde is gone now, but a while back, her daughters found us on Facebook. We exchange enthusiastic emojis on holidays and birthdays. Her eldest, Monika, met me at my hotel with her own daughter, Michaela. Because my German has dwindled to an embarrassing collection of simple nouns and un-conjugated verbs, Michaela pulled up lists of idioms on her phone to help me understand Monika. She read triumphantly from her screen: “My mother says her English is under all pig!” After we stopped giggling at the sound of it in English, she explained that under all pig means it’s the worst.

We fell Into a German idiom Internet hole from there. So. Many. Animals. Mostly pigs. Being under all pig is not good, but to have pig (Schwein haben) means you’re lucky, which is awfully confusing. And if you don’t know someone well, you can say, “We haven’t kept pigs together yet.” My favorite phrase is meta-porcine: “Warum spielst du die beleidigte Leberwurst?” Literally, “Why are you playing the insulted liver sausage?,” but idiomatically, Why are you throwing such a tantrum? So useful, what with all those insulted sausages on Twitter these days.

I asked how things have been since the Wall came down. Nicht gut, they said, shaking their heads. East Germans just get checks from the government, they groused. Some Osties, like Gerde’s brother, still defend the socialist regime, so they don’t see him anymore. The Wall may be gone, but there’s still what Germans call a “Mauer im Kopf,” a Wall in the mind. Most recently, Chancellor Angela Merkel welcomed a million refugees who require support.”They don’t have the same values we do. They commit crimes!” Monika lamented. “But isn’t Michaela’s partner a Turkish immigrant and a Muslim? How is he different from the Syrians?” I instantly regretted asking this. But Monika didn’t see a contradiction: “He’s been in the country for years! He speaks German. He’s family.”

Different country, same debates. Clearly, the whole world is under all pig these days. So let’s talk about dogs! I showed them photos of my puppy, and we discussed Berlin’s many parks and their suitability for large poodles. They gave me a huge bag of chocolate Smarties, the kind I loved when I was 4. I got teary and promised to come back, because I always do. Then it was time to saddle up the chickens and go home. 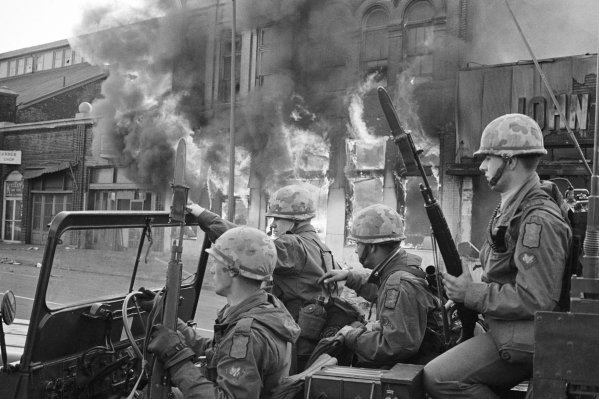 50 Years After 1968, We Are Still Living In Its Shadow
Next Up: Editor's Pick