Team USA hockey fans anticipating another “Miracle on Ice” shouldn’t hold their breath — at least when it comes to the men’s team.

The U.S. men’s ice hockey team lost its first match of the 2018 Winter Olympics on Wednesday after Slovenia rallied for a 3-2 comeback win. Despite leading the game 2-0 before the third period, the U.S. collapsed as Slovenia tied up the game with just 1:37 left to play. Slovenia then scored the game-winning goal in overtime.

Slovenia only made its Winter Olympics ice hockey debut in 2014 at the Sochi Games, where the team made a surprising appearance in the quarterfinals. The U.S. easily beat Slovenia back then with a 5-1 win in the final preliminary match ahead of the Olympic playoffs. But those games were under different circumstances.

The National Hockey League chose not to send players to the 2018 Winter Olympics amid disputes between the league and the International Olympic Committee over costs and injury risks, among other factors. The decision marked the first time in more than 20 years that professional NHL athletes could not participate in the Olympics. The move dramatically altered the rosters for not only Team USA, but also for teams from Canada, Sweden and Russia, among other countries.

Some Team USA fans were hoping for a miracle like they saw back in 1980 in Lake Placid, New York. That year, a ragtag team of amateur hockey players beat the Soviet Union’s Red Army team, the gold medal favorite that was then considered the best hockey team in the world. That game has long inspired hope in Americans vying for a satisfying ending to an underdog hockey story. But even with NHL talent in Team USA’s Olympic hockey roster during the past few Games, the U.S. only made it on the podium twice, in 2002 in Salt Lake City and 2010 in Vancouver, winning silver both times.

Slovenia, which is ranked 15th by the International Ice Hockey Federation (the U.S. is ranked fifth), achieved its late-game comeback Wednesday in large part thanks to team captain Jan Mursak. Mursak, who briefly played for the NHL’s Detroit Red Wings between 2010 and 2012, scored the game-tying goal in the third period and the game-winning goal just seconds into the sudden-death overtime.

Jan Mursak #39 of Slovenia celebrates after scoring the game winning goal against Ryan Zapolski #30 of the United States in overtime of the Men's Ice Hockey Preliminary Round Group B game on day five of the PyeongChang 2018 Winter Olympics at Kwandong Hockey Centre on February 14, 2018 in Gangneung, South Korea.
Pool—Getty Images

Team USA had two goals in the game from Brian O’Neill and Jordan Greenway, the latter of whom is first black athlete to compete on the U.S. Olympic men’s ice hockey team. But the team stopped short of carrying the momentum throughout the third period and overtime to secure its first win.

“I thought we took the foot off the gas,” O’Neill told NBCOlympics.com after the game. “I thought the best part of the beginning of the game was that we were pushing pucks, hunting pucks, putting [Slovenia] in tough situations. We kind of stopped doing that in the third period.”

The U.S. has a chance to redeem itself in its two upcoming preliminary matches. The first, against Slovakia, takes place on Thursday at 10:10 p.m. EST (or mid-day Friday in South Korea). The second, against the Olympic Athletes from Russia, happens on Saturday at 7:10 a.m. EST (or Saturday evening in South Korea).

These preliminary matches determine the seeding for the playoff games, which start Monday, Feb. 19, and conclude with the bronze medal and gold medal games on Saturday, Feb. 24. The Olympic Athletes from Russia, a team that is comprised of Russian athletes but not competing under the Russian flag due to the IOC’s ban on the country following a massive doping scandal, were considered by some as the gold-medal favorite. But that team has also already had a loss in the preliminary rounds, at the hands of Slovakia.

As for Team USA fans, it’s looking far more likely that a gold medal victory could come from the women’s team, where fans are anticipating another intense face-off with Canada as the U.S. hopes to win its first Olympic gold in 20 years. The American and Canadian women’s teams face off during the preliminary rounds Wednesday evening at 10:10 p.m. ET. 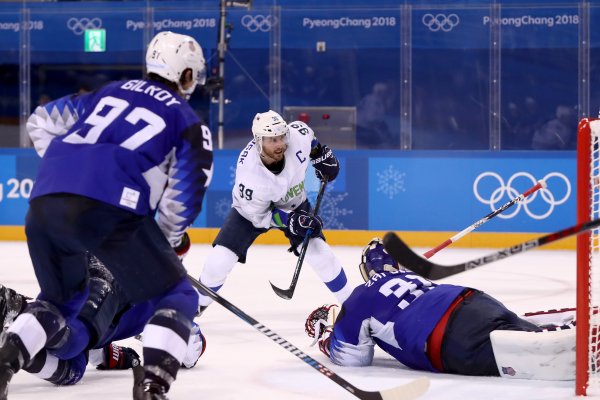 The Internet Can't Believe U.S. Hockey Lost to Slovenia
Next Up: Editor's Pick