9 Books to Read for Black History Month, According to Scholars

Black History Month is a moment to look backwards, but also to assess how what’s come before influences where we are now. For proof that the past lives in the present, look no further than the news earlier this year that prisons in Florida, North Carolina and other states had banned inmates from reading The New Jim Crow, Michelle Alexander’s influential book about race and the evolution of mass incarceration. Though some bans were overturned, it goes to show that history can be a powerful thing — so powerful that some would have knowledge restricted.

For Black History Month, an annual opportunity to reflect on progress and power, TIME asked scholars of African-American history to name the books they’d recommend to help readers better understand what came before. Their choices — which include The New Jim Crow — reflect rich scholarship, iconoclastic ideas and a serious grappling with the roots of some of today’s most pressing issues. Here are the 9 Black History month books they recommend:

Harriet A. Jacobs, Incidents in the Life of a Slave Girl, Written By Herself

“I recommend this narrative for Black History Month so that readers can learn firsthand about the experiences of an enslaved woman, one who is largely unknown to the general public yet recognized among scholars. This is a remarkable story of resistance, resilience and the desire for freedom.”

— Daina Ramey Berry is an associate professor at the University of Texas at Austin and author of The Price for Their Pound of Flesh: The Value of the Enslaved, from Womb to Grave, in the Building of a Nation.

Buy now: Incidents in the Life of a Slave Girl, Written By Herself

Michelle Alexander, The New Jim Crow: Mass Incarceration in an Age of Colorblindness

“Every American should read The New Jim Crow, which brilliantly illustrates how mass incarceration functions to re-enslave black people and to dupe Americans into believing that racism and Jim Crow are dead.”

— Bettye Collier-Thomas is a professor at Temple University and author of Jesus, Jobs, and Justice: African American Women and Religion.

Buy now: The New Jim Crow: Mass Incarceration in an Age of Colorblindness

“A grand but somewhat neglected memoir by a polymath of the Jazz Age. An exceptional foreign service career terminated by Woodrow Wilson’s racism, Johnson’s revenge exposed the horrors of Wilson’s Haitian occupation. Johnson’s lyrics enchanted Broadway audiences and boosted GOP presidential campaigns. His statesmanship heeled the bitter divide between followers of Booker Washington and W. E. B. Du Bois; his poetry and an anonymous novel introduced the ‘New Negro’ of the ’20s. As the NAACP’s first African American executive secretary, a cosmopolitan James Weldon Johnson presented that organization’s transactional face as the obverse of its militantly assertive Du Boisian face.”

— David Levering Lewis is an emeritus professor at NYU and author of the two-part biography W.E.B. Du Bois.

Buy now: Along This Way: The Autobiography of James Weldon Johnson

W.E. B. Du Bois, Black Reconstruction in America: An Essay Toward a History of the Part Which Black Folk Played in the Attempt to Reconstruct Democracy in America, 1860-1880

“This classic of black history is especially pertinent today because it describes the attempt to establish black citizenship and an interracial democracy in the United States immediately after the Civil War and the abolition of slavery. This experiment in American democracy was overthrown and a rigid system of racial subordination, segregation, disfranchisement, lynching and racial violence was established in the south. It teaches us how quickly political gains can be undone and that the fight for racial equality in the United States is an ongoing one.”

— Manisha Sinha is a professor at the University of Connecticut and author of The Slave’s Cause: A History of Abolition.

Buy now: Black Reconstruction in America: An Essay Toward a History of the Part Which Black Folk Played in the Attempt to Reconstruct Democracy in America, 1860-1880

Deborah Gray White, Ar’n’t I a Woman?: Female Slaves in the Plantation South

“This seminal book recovered the lives of enslaved women who lived on the large plantations and small farms across the South. The first of its kind, Ar’n’t I a Woman is a must read for anyone interested in American history.”

— Erica Armstrong Dunbar is a professor at Rutgers and author of Never Caught: The Washingtons’ Relentless Pursuit of Their Runaway Slave, Ona Judge.

Buy now: Ar’n’t I a Woman?: Female Slaves in the Plantation South

“Those who were excluded and left behind — African Americans — were Ellison’s ‘invisible’ people. Today, especially within the context of democracy’s struggles around the world, that experience has valuable lessons for many others as well.”

— Juliet E.K. Walker is a professor at the University of Texas at Austin and author of The History of Black Business in America: Capitalism, Race, Entrepreneurship.

“Through this masterful book of Black radical history and philosophy, I can look past the dreariness of our unfree world with the binoculars of the imaginary, learning from those female and male 20th century activists Kelley chronicled who refused to let any oppressor stop their movement dreams of a free life, of a free world.”

— Ibram X. Kendi is a professor at American University and author of Stamped From the Beginning: The Definitive History of Racist Ideas in America.

The University of North Carolina Press

“While most Americans probably equate slave resistance with men like Nat Turner and acts of revolutionary violence, in Closer to Freedom, the late Stephanie Camp showed us how enslaved women resisted slavery’s confines through everyday efforts to reclaim their time, space, and bodies.”

— Simon Balto is an Assistant Professor of History at Ball State University and author of the forthcoming Occupied Territory: Policing Black Chicago from Red Summer to Black Power.

Julius S. Scott, The Common Wind: Currents of Afro-American Communication in the Era of the Haitian Revolution

“A 1986 dissertation by the brilliant Julius S. Scott — never published as a book — documents a turbulent world of news, rumor, and politics in what has come to be known as the Black Atlantic World. It was a work so exciting, original, and profound that young history graduate students used to pass it around like an underground mix-tape, inspiring an entire generation to create a new field of knowledge about the past.”

— Vincent Brown is a professor at Harvard and author of The Reaper’s Garden: Death and Power in the World of Atlantic Slavery.

Buy now: The Common Wind: Currents of Afro-American Communication in the Era of the Haitian Revolution 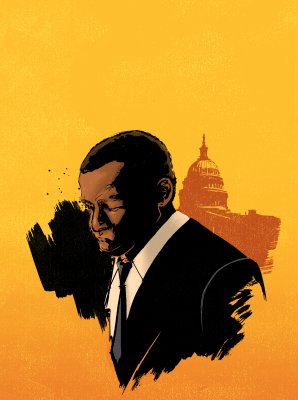 Exclusive: Congressman John Lewis' Next Book, 'Run,' Will Pick Up Where Award-Winning 'March' Left Off
Next Up: Editor's Pick