Pedestrian crossing signals in southern Taiwan received a romantic redesign this week; a traditional lone walker symbol was joined by a sweetheart just in time for Valentine’s Day.

More than 40 intersections in southern Taiwan’s Pingtun county were programmed with the holiday crossing signals, which display a man kneeling to propose during red lights and a couple walking together during green lights, Taiwan News reports. Mayor Pan Men-an said the new signs demonstrated that Pingtung is “a county filled with love.”

The new displays were commissioned by local police and debuted on a limited trial basis in December last year, before receiving the full roll-out Tuesday. The creative redesign also serves a practical purpose, said creator Cheng Da-wei, by helping “attract” pedestrians’ attention to improve traffic safety. At the opening ceremony for the new road signs this week, he noted that the redesign also ended 18 years of solitude for the street-crosser.

Taiwan isn’t the first place where street crossing signs have gotten a romantic revision. Red traffic lights in the Philippines’ Bonifacio Global City have been converted into hearts for Valentine’s Day every year from 2012 to 2016, while street crossing signs at London’s Trafalgar Square were reportedly replaced by same sex couples and gender symbols in honor of the city’s annual Pride parade in 2016. Last year, Melbourne swapped out its male street crossing symbol for a more discernibly female one at ten central intersections to help raise awareness about gender inequality and “reduce unconscious bias,” according to community nonprofit Committee for Melbourne. 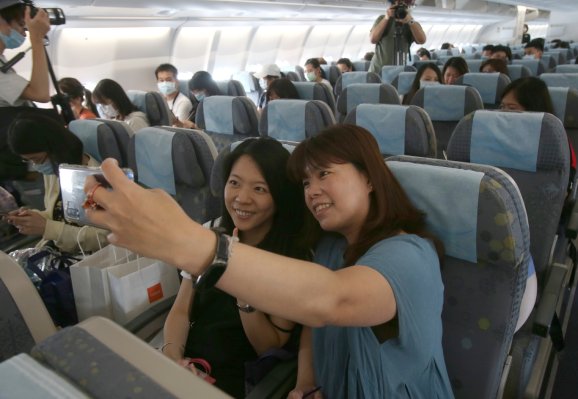