Myanmar’s persistent denial of a campaign of ethnic cleansing against the country’s Rohingya Muslim minority is “preposterous,” U.S. Ambassador to the U.N. Nikki Haley said Tuesday, calling on the government of Nobel laureate Aung San Suu Kyi to acknowledge that atrocities had been committed by the military.

Addressing a meeting of the U.N. Security Council, Haley said Myanmar is “preventing access to Rakhine to anyone or any organization that might bear witness” to alleged atrocities against the mostly stateless group, Reuters reports. Independent media and aid workers have been blocked from northern parts of Myanmar’s Rakhine State since October 2016, when the military launched brutal counter-insurgency operations.

A U.N. fact-finding mission has been denied visas since it was announced in March last year.

Nearly 690,000 Rohingya have fled Rakhine for neighboring Bangladesh since August, when another round of violence erupted in the state. Many of the refugees arrived with accounts of extrajudicial killings, rape, torture and arson. U.N. High Commissioner for Human Rights Zeid Ra’ad al-Hussein has described the crisis as a “textbook example of ethnic cleansing,” and said he couldn’t rule out “elements of genocide.”

Haley also called for the release of two detained Reuters journalists, Wa Lone and Kyaw Soe Oo, who were arrested while investigating a mass grave of 10 Rohingya bodies. French U.N. Ambassador Francois Delattre added that military’s mass execution of 8 Rohingya men and two teenage boys, which was detailed in a Reuters investigation last week, could “constitute crimes against humanity.” 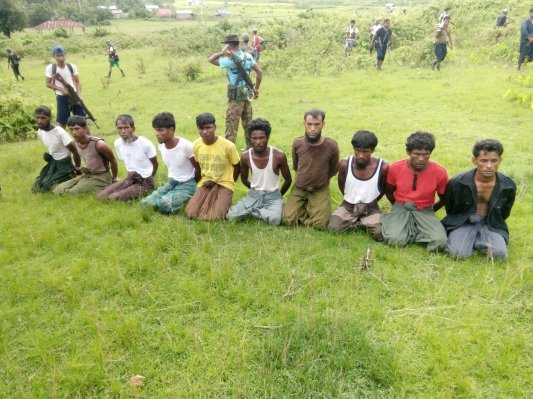 Detained Myanmar Journalists Were Probing a Massacre
Next Up: Editor's Pick