Shaun White stood at the top of the 2018 Winter Olympics Games halfpipe Wednesday morning, needing the run of his life. This was the bottom of the ninth, two outs, full count. White was the last rider of the competition. If he failed to top the 95.25 score turned in by Ayumu Hirano of Japan, he’d earn a silver. White wanted only gold.

To this point, the 2018 Winter Olympics Games had lacked such high athletic drama, this do-or-die moment involving a big name, for its mass American audiences. White had been taking laps around the mountain on a chairlift, kibbitzing with other boarders who were training for their events. “Anything to distract from this imminent pressure-cooker situation,” he says. The wait felt like an eternity. At go-time, he high-fived his coaches, and let his mind roam free. “I said to myself, you know you’ve got this,” White says. “This is what you’ve done your whole life and career. Savor this moment. Because you just might win the Olympics.”

Then he did it. White grabbed the halfpipe gold medal with a blistering final run, his score of 97.75 topping Hirano. The victory makes White the first snowboarder in history to win three Olympic golds. Hirano earned silver — afterwards, he expressed disappointment with the judging — and Australia’s Scotty James took bronze.

For the first time in his life, White landed back-to-back 1440s — a maneuver that requires four full aerial revolutions — to help secure the win. White had never even practiced this combo. Too dangerous. But Hirano had pulled it off in his second run, impressing the judges. White knew he needed it in order to win.

White bawled after his score flashed on the screen. “I’ve never seen him cry before,” said his father, Roger, at the bottom of the pipe. Not even when he broke a finger when he was younger, said his dad. “He was such a tough little kid.”

American officials may as well set up a medals plaza at the Phoenix Snow Park, home of the snowboarding events at these PyeongChang Olympics. The U.S. has now won gold in four straight medals over four straight days here, making all kinds of history along the way. Red Gerard, 17, became the youngest snowboarding gold medalist on Sunday in the men’s slopestyle event. Jamie Anderson, 27, won the women’s slopestyle event Monday, joining White as the only snowboarders to win two Olympic golds (although with his win Wednesday, White now stands alone with three). On Tuesday, Chloe Kim, 17, warmed hearts with her hangry tweets about breakfast sandwiches and an awesome aerial display. She’s also the first female snowboarder to land back-to-back 1080s — three full revolutions in the air — at the Olympics. Shaun White’s victory also secured the United States’ 100th-ever gold medal in the Winter Olympics overall, per the Associated Press’ count.

At 31 years old, White is the grandpa of the group. He stormed onto the Olympic scene as “The Flying Tomato” in 2006, a teenager whose shaggy red mane whipped around the Torino Games. (White has since cut the hair, but while in South Korea still managed to grab a nearly $1,000 burger named in his honor). He repeated his gold run in Vancouver, but failed in Sochi, falling twice in his first run and finishing in fourth place. Sochi devastated White.“You don’t ever really get over it,” White told NBC Sports a year ago. He lost his love for the sport.

He rejuvenated himself for PyeongChang. But his comeback almost got derailed when he smashed his face into the lip of a frozen halfpipe in October — while practicing a 1440 — a gruesome accident that required 62 stitches. He could have hung up his snowboard, having accomplished everything he could in his sport: two Olympic gold medals, endorsements, riches, mainstream recognition and appeal.

He thought about retirement. “I just knew I didn’t want to feel this way again,” says White. “This is awful. I’ve never had such a visually jarring injury. It’s always you bruise this, or a torn something. But never physically looking in the mirror and going, what happened? And will I look the same?” At the scene of the crash, White’s coach, J.J. Thomas, told him he’d be fine. But Thomas refused to make eye contact with White. Other athletes training with White in New Zealand were forced to maneuver around his puddle of blood.

But White still wanted one more shot at the Olympics, Controversy, however, has clouded Shaun White’s comeback story. Lena Zawaideh, a former drummer in White’s rock band Bad Things, accused White of sexual harassment in a 2016 lawsuit. “White sent sexually explicit and graphic images to Zawaideh of engorged and erect penises, forced her to watch sexually disturbing videos, including videos sexualizing human fecal matter, and made vulgar sexual remarks to her,” the suit said. White’s attorneys have denied the allegations in the past. White and Zawaideh reached an undisclosed settlement in 2017.

What will these allegations mean for White’s athletic career, and legacy more broadly? The snowboarding world, and Americans as a whole, will sort that out over these next few days and weeks.

In South Korea, meanwhile, only adoring fans surrounded White, some wearing Team USA beanies, others from around the world. The crowd almost tore over a fence, trying to get closer to him. “Thank you Shaun!” one American fan yelled to him. White just wrote the best drama of these PyeongChang Olympics Games. 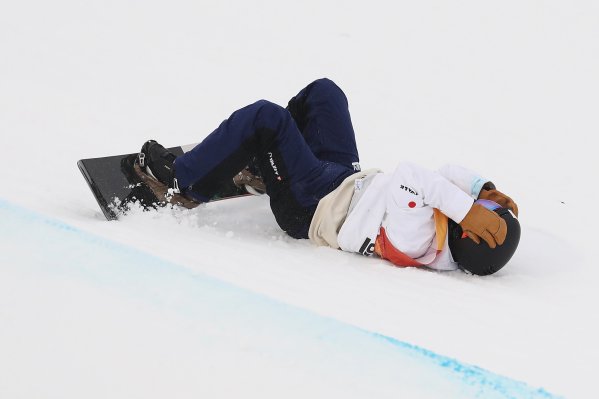 16-Year-Old Olympic Snowboarder Yuto Totsuka Took a Nasty Fall and Everybody Is Hoping He's OK
Next Up: Editor's Pick