Scientists Just Issued a Grim New Warning on Climate Change: 'We Are Not Prepared'

New research shows that countries around the world are falling short of greenhouse gas goals in the Paris climate deal, and the consequences will likely be unprecedented extreme weather.

Published in the journal Science Advances this week, the study found that the likelihood of extreme heat, dryness and precipitation will increase across as much of 90% of North America, Europe and East Asia if countries do not accelerate their efforts to reduce greenhouse gas emissions.

“We are not prepared for today’s climate, let alone for another degree of global warming,” says study author Noah Diffenbaugh, a Stanford University professor of earth system science.

The 2015 Paris Agreement, which President Donald Trump has promised to exit when the U.S. is eligible to do so, aims to keep temperature rise below 3.6°Fahrenheit by 2100 with an ideal target of 2.7° Fahrenheit. Though the differences seem minor, the study shows the difference between those targets would lead to dramatic increases in the likelihood of record warm or wet days, according to the study.

Under the agreement, countries from across the globe offered their own individually determined pledges to reduce their greenhouse gas emissions, but those collective commitments still allow temperatures to rise 5.8° Fahrenheit, according to data from the United Nations Environment Program. Some countries do not seem eager to meet their commitments at all.

Scientists say the clock is ticking if countries aim to actually reduce emissions in a way that’s consistent with the Paris Agreement’s targets. In some cases, greenhouse gases emitted today will stay in the atmosphere decades. 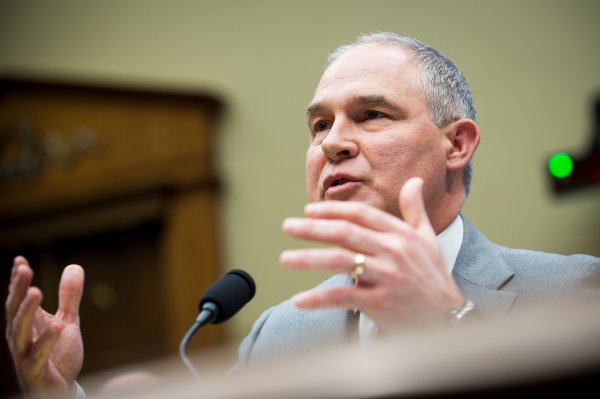 The EPA Head Has a New Argument: Maybe Climate Change Will Be Good
Next Up: Editor's Pick