Black Panther, unlike many of the other films in the Marvel Cinematic Universe, stands largely on its own. Director Ryan Coogler eschews easter eggs and is (thankfully) less interested in the politics of the Avengers than he is in the politics of Wakanda, the fictional, tech-savvy nation ruled by T’Challa, a.k.a. Black Panther (Chadwick Boseman).

But save some popcorn for the end of the movie: There are two post-credit scenes that connect Black Panther and its characters to the larger Marvel Cinematic Universe and hint at what is to come in Marvel’s next film, Avengers: Infinity War.

On May 4, a number of Marvel superheroes — including the Avengers and the Guardians of the Galaxy — will join forces to stop Thanos, the evil alien who has loomed large over many of the Marvel films. He’ll finally step into the role of the main villain in Infinity War and try to destroy the galaxy. To do so, he needs to gather all the Infinity Stones, super-powered gems that have shown up throughout the Marvel Cinematic Universe. The Black Panther end-credits scenes suggest a few ways that the Avengers could stop him.

Scene 1: T’Challa speaks at the United Nations about Wakanda

In the first post-credits scene, T’Challa stands before the United Nations. He promises that Wakanda, formerly a isolationist nation, will share its knowledge and resources with the rest of the world: “The wise build bridges while the foolish build barriers.”

The speech is a blatant rebuke of the Trump administration’s immigration policies, a continuation of the film’s overtly political themes. (Black Panther isn’t even the first superhero movie to tackle immigration. Last year’s X-Men movie Logan took umbrage at the persecution of immigrants.) Avengers: Infinity War probably won’t be as political as Black Panther, but there’s a chance that T’Challa’s new philosophy plays a role in his decision to join his fellow superheroes in stopping Thanos.

T’Challa’s announcement is great news for any city that wants to build a more efficient subway system like the one in Wakanda. But sharing Vibranium, Wakanda’s most precious resource and the metal found in both Black Panther’s suit and Captain America’s shield, is risky. Vibranium weapons could be more effective against Thanos. But if the metal falls into the wrong hands (say, Loki’s) that could mean disaster for our heroes.

Scene 2: Bucky Barnes is alive and well in Wakanda, thanks to Shuri

Captain America’s obsession with restoring Bucky’s memory in Civil War drives a wedge between Cap and fellow Avenger Iron Man, and, well, starts a civil war. Black Panther gets mixed up with the feuding Avengers after his father, T’Chaka, is killed in a bombing. Black Panther believes Bucky is responsible and chases him down, only to discover Bucky was framed. He offers to help Bucky and Cap and brings them to Wakanda. In a post-credits scene of Civil War, Bucky voluntarily enters into cryostasis in Wakanda until someone can figure out how to fix his brain.

Turns out, he didn’t stay asleep for long. In the Black Panther‘s second post-credit scene, Barnes wanders out of a tent in a Wakandan village and greets Shuri, T’Challa’s 16-year-old genius sister who apparently figured out a way to fix his brain.

Wakandan children run around Bucky and call him “White Wolf.” In the comic books, T’Challa’s father T’Chaka saves an orphaned baby named Hunter. Hunter grows up in Wakanda (despite being an outsider) and earns the nickname White Wolf. He eventually leads Wakanda’s spy organization, the Dogs of War. Barnes, a trained assassin, will presumably fill that role now that he’s recovered.

The Avengers are currently trying to maintain galactic peace with a fraction of their normal staff: Captain America and Iron Man are feuding; Hulk and Thor are floating around space; and Spider-Man opted out of becoming an Avenger so he could finish high school. The remaining Avengers could really use the help of Black Panther’s crew, including Bucky and badass Wakandan warriors Nakia (Lupita Nyong’o) and Okoye (Danai Gurira). Incorporating Bucky and Shuri into the Dogs of War will be an easy way to connect them to the Avengers.

All those characters have already shown up in promotional material for Infinity War. One of the last shots of the Infinity War trailer (above) shows Black Panther, Okoye, Bucky, Captain America, Black Widow, Hulk and Rhodes running together in what looks to be Wakanda. 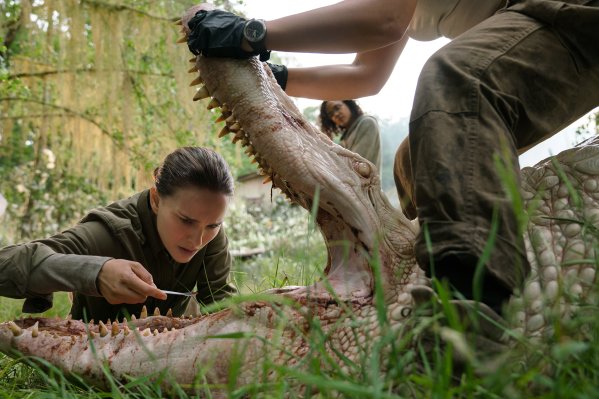 People Have Accused Annihilation of Whitewashing. Here's How Its Director and Stars Responded
Next Up: Editor's Pick