The nation’s top spies told Congress Tuesday that Russia has taken steps to influence the 2018 U.S. midterm elections and plans to harness an arsenal of propaganda, social media, false personas, other means of influence to try to meddle in the American political system.

Director of National Intelligence Dan Coats said Russia has determined that cyber operations to disrupt the 2016 presidential campaign was “successful,” and this year’s midterms is the next likely target. With voting in some parts of the country beginning in March, the intelligence community is educating state and local governments for the attacks, he said.

“We need to inform the American public that this is real, that this is going to happen,” he told the Senate Intelligence Committee. America needs “to stand up and say we’re not going to allow some Russian to tell us how to vote, how we ought to run our country. And I think there needs to be a national cry for that.“

The Russians have learned lessons and “upped their game” since President Donald Trump’s unexpected victory in the 2016 election, utilizing advertisements and “fake news” articles on Facebook and other social media platforms, Coats said, calling the tactic “pervasive.”

“We have seen Russian activities and intentions to have an impact on the next election cycle,” Pompeo said.

The intelligence chiefs stressed that Russia was attempting to undermine Western democracies through its ongoing information war waged by humans and automated computer programs known as bots on websites like Twitter, Facebook, Reddit and Google. Their testimony was in stark contrast to the President’s repeated claims that there was no meddling in the 2016 election. Trump has cast doubt on the evidence that the Kremlin tried to influence Americans, calling it “fake news” and a “hoax.”

Sen. Jack Reed, a Rhode Island Democrat, asked several of the intelligence chiefs whether the President had asked them to specifically focus on blocking the possibility of Russia’s meddling. They responded that Trump made no such direct request of them.

Sen. Richard Burr, Republican of North Carolina and chairman of the committee, said a comprehensive overview of findings about what happened during the 2016 election will be made public before this year’s primary elections so that security can be intensified.

“We realize that we have to answer for the American people: What did Russia do to mess with the 2016 elections?” he said.

“Cyber is clearly the most challenging threat vector this country faces,” Burr said. “It’s also the most concerning, given how many aspects of our daily lives in the United States can be disrupted by a well-planned, well-executed cyberattack.”

The intelligence community also expects Russia will conduct “bolder and more disruptive cyber operations,” throughout Europe, particularly at North Atlantic Treaty Organization allies. It will use the conflict in Ukraine as a testing ground to disrupt energy grids, hack-and-leak influence operations, and other digital attacks. It will apply those lessons to “probe U.S. and allied critical infrastructures,” he said.

Sen. Mark Warner of Virginia, the highest-ranking Democrat on the committee, said the Russian threat “did not begin in 2016, and it certainly didn’t end with the election.”

“What we are seeing is a continuous assault by Russia to target and undermine our democratic institutions, and they are going to keep coming at us,” he said. 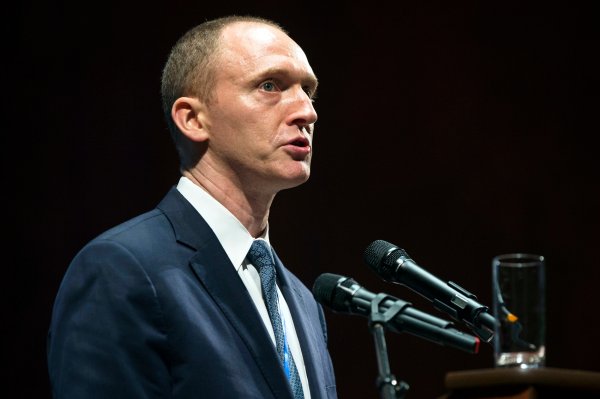 Who Is Carter Page? Meet the Donald Trump Advisor at the Center of the GOP Memo
Next Up: Editor's Pick