In what would be one of the biggest shakeups of the U.S. food-stamp program in its five-decade history, President Donald Trump is proposing to slash cash payments and substitute them with “100 percent American grown food” given to recipients.

The changes, outlined Monday in Trump’s budget proposal, would reshape the Supplemental Nutrition Assistance Program, or SNAP, which supports roughly one in eight Americans, by reducing cash spending by about one-third from current levels.

The plan is part of an effort to reform SNAP and save a projected $214 billion over a decade. It would give all households receiving more than $90 a month in cash a food-aid package that would “include items such as shelf-stable milk, ready to eat cereals, pasta, peanut butter, beans and canned fruit, vegetables, and meat, poultry or fish,” according to the proposal.

Shares of Dollar Tree Inc. and Dollar General Corp. both dropped on Monday after the plan was unveiled.

The so-called USDA America’s Harvest Box “is a bold, innovative approach to providing nutritious food to people who need assistance feeding themselves and their families — and all of it is home grown by American farmers and producers,” Agriculture Secretary Sonny Perdue said in a statement. The program would provide food-stamp recipients with “the same level of food value” as the current system, Perdue added.

Reaction was muted on Capitol Hill, where both congressional agriculture committees are working on reauthorizations of the food stamp program as part of a farm law that expires Sept. 30.

“The task at hand is to produce a Farm Bill for the benefit of our farmers, ranchers, consumers and other stakeholders,” House Agriculture Committee Chairman Michael Conaway of Texas and Senate Agriculture Committee Chairman Pat Roberts of Kansas, both Republicans, said in a joint statement. “This budget, as with every other president’s budget before, will not prevent us from doing that job.”

The food stamp program served 42.2 million people and 20.9 million households on average during the 2017 fiscal year. The average household benefit was $254.14, thus 81 percent of homes receiving aid would be included in the initiative, according to the USDA. SNAP assistance cost $68.1 billion in 2017, with $63.7 billion given out as benefits.

Under the plan, the amount of food a household receives would be scaled to the size of the allotment, with about half of the assistance coming as food instead of cash. The USDA already buys commodities for other programs, such as the National School Lunch Program, and states would largely be in charge of distribution, the department said.

“States can distribute these boxes through existing infrastructure, partnerships, and/or directly to residences through commercial and/or retail delivery services,” the department said in a statement.

The USDA also touted tightened eligibility rules for recipients, such as stricter work requirements, as well as changing income and benefits calculations “to ensure benefits are targeted to the neediest households.”

Major agricultural and food lobby groups refrained from comment, while one anti-hunger group was alarmed at the proposal.

The plan would replace a system that’s working “with a Rube-Goldberg designed system of commodity distribution via food boxes that will be administratively costly, inefficient, stigmatizing, and prone to failure,” Jim Weill, president of the Washington-based Food Research & Action Center, said in a statement. 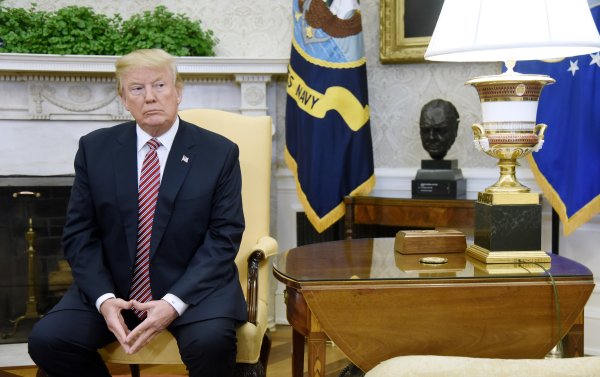 Trump Goes After the #MeToo Movement
Next Up: Editor's Pick