Shaun White Is Going For Olympic Gold in the Snowboarding Halfpipe Event Tonight. Here's What to Know

Snowboarding legend Shaun White is going for Olympic gold on Wednesday morning (Tuesday night for those watching in the United States) in his signature event of the men’s halfpipe at the 2018 Winter Olympics in PyeongChang, South Korea.

After qualifying for the men’s snowboarding halfpipe finals with a 98.5 run, White faces stiff competition heading into the finals, where he will square off against Australia’s Scotty James and Japan’s Ayumu Hirano.

The men’s halfpipe final follows the women’s event, where American phenom Chloe Kim won the gold medal and became the youngest woman to do so in the event in Winter Olympics history.

That was just one gold medal in what has so far been a U.S. sweep of the sport, with snowboarders Red Gerard and Jamie Anderson scoring gold medals in the men’s and women’s slopestyle events, respectively.

Before White, James and Hirano face off on the halfpipe in a battle for gold, here are several things to know about the snowboarding halfpipe event, including snowboarding terms and when the sport first made its Olympics debut.

Set on a 22-foot halfpipe, the men’s halfpipe event at the 2018 Olympics includes a qualification round and a final round. The top 12 scorers from the qualifications, where snowboarders get two runs on the halfpipe to earn the best score possible, go on to the final round. There, they will have three runs down the halfpipe to earn their highest score, which can range from 1 to a perfect 100.

According to the rules set by the International Ski Federation (ISF), snowboarders compete in the finals in reverse order of when they qualified. So, because White had the top score in his qualifications, he will compete last amongst the 12 finalists Wednesday.

A snowboarder’s score is determined by a panel of six judges, who will rank the halfpipe run on a scale that goes up to 100. The lowest and highest scores from the six judges are then removed, and the remaining four scores are averaged to create an athlete’s final score, according to the ISF.

A judge’s score comes as the result of a number of factors that determine how difficult a halfpipe run was. Here are a few of examples of how these factors fit into a score:

Of course, snowboarders can be deducted for a number of mistakes, from small to large, during their runs. Though White had the highest score in qualifications going into the men’s halfpipe finals at the Winter Olympics in Sochi, he fell twice in Sochi during his first run and lost points that could have placed him on the podium. Luckily for White, he didn’t stop during those spills in Sochi. If a snowboarder stops on the halfpipe for more than 10 seconds, they can no longer earn any more points on their run and they must exit the course.

With difficulty and risk-taking as a vital part of a snowboarder’s score in the halfpipe, the best snowboarders often try to land technically challenging tricks to appease the judges and improve their chances to get on the podium. The top three competitors in the men’s halfpipe this year — White, Hirano and James — have all landed impressive snowboarding tricks before.

Here’s what we know about their spectacular moves:

In White’s most impressive run to date at the Winter Olympics qualifications earlier this year when he scored a perfect 100, White completed one 1440 and a double McTwist 1260, one of his signature tricks that he first debuted in 2010. That tricky move includes three twists and two flips.

Hirano is the first snowboarder to land back-to-back double cork 1440s in the halfpipe run. He first landed the trick at the X Games Snowboard SuperPipe competition earlier this year, where he won with a nearly perfect score of 99.00.

James, who has voiced criticism over White’s perfect score of 100 earlier this year, has a signature snowboarding move of his own. His backside, double cork 1260 includes three-and-a-half rotations with a blind landing — and he is the only snowboarder to land the move in competition.

Snowboarding’s history at the Olympics

Spectators certainly did not see any snowboarders shredding the half pipe at the first Winter Olympics in 1924 in Chamonix, France. The sport of snowboarding and the halfpipe did not make its Olympics debut until the 1998 Games in Nagano, Japan. Back then, Switzerland’s Gian Simmen claimed the men’s halfpipe victory, and the U.S.’s Ross Powers earned bronze.

After that, the U.S. went on to dominate in the halfpipe event at the Olympics, with Powers securing gold at the 2002 Winter Olympics in Salt Lake City, and his teammates Danny Kass and Jarret Thomas earning silver and bronze, respectively.

White took the lead from there, earning gold medals in the event in 2006 in Turin and 2010 in Vancouver. Iouri Podladtchikov brought home another gold for Switzerland in 2014 in Sochi when White failed to make it on the podium.

Similarly, the U.S. has dominated the women’s snowboarding halfpipe event in past Olympic Games. Americans have won gold, silver or bronze in the event since it debuted in 1998. Kelly Clark was a stand-out for Team USA in the event, winning gold in 2002 and bronze in 2010 and 2014. This year Clark placed fourth, behind her teammate and 17-year-old star Chloe Kim, who won gold, and the U.S.’s Arielle Gold, who won bronze.

You can watch the halfpipe final event on NBC tonight starting at 8 p.m. ET 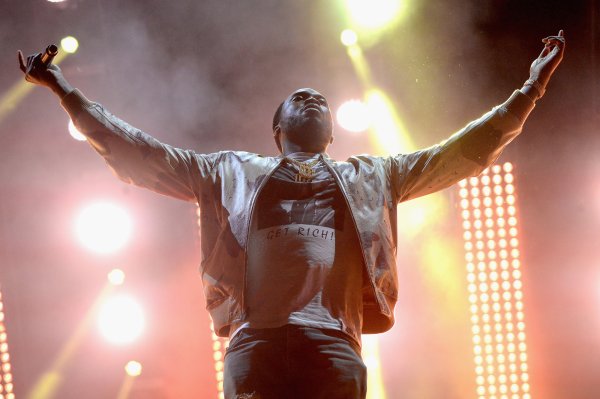 This Slovenian Snowboarder Demanded Justice for Meek Mill at the 2018 Winter Olympics
Next Up: Editor's Pick