Maia and Alex Shibutani Are Everyone's Favorite Skating Siblings. Here's How They Got to the Olympics

Doing anything with your brother or sister can be a recipe for conflict. But American Olympic ice dancers Maia and Alex Shibutani may be the exception. They proved that at the first figure skating event of the 2018 Winter Olympic Games, the team skating event in PyeongChang. Skating first to a lively mix of mambo, samba and cha cha, and then to Coldplay, the pair known as the ShibSibs easily shouldered the responsibility of anchoring the U.S. squad, leading it to a bronze medal.

The Shibutanis quest for another Olympic medal began again on Sunday Feb. 18 ET in the ice dance short program at the Gangneung Ice Arena.The ShibSibs skated well, earning a score of 77.73, but finished the night fourth behind Canada’s Tessa Virtue and Scott Moir, the French team of Gabriella Papadakis and Guillaume Cizeron, and their U.S. teammates Madison Hubbel and Zach Donohue, who edged them out by a fraction of a point. The third American pair, Madison Chock and Evan Bates, finished the night in seventh.

Still, the ShibSibs feel they’re well-positioned to make a run for a medal in the free dance, which takes place tomorrow night (Feb 19. ET). The pair will be skating to Coldplay for their long program. “Right now I feel really proud of how we did,” says Alex. “The score is better than in the team event and I just felt that the performance was so natural we had a lot of fun out there.”

Sibling duos are rare in ice dance, mainly because the discipline — which lacks figure skating’s big tricks of jaw-dropping lifts and gasp-worthy throw jumps — often relies on the heat generated between the couple to sustain the audience and the judges’ interest. (Although brother-sister pairs are unprecedented at the Olympics: Isabelle and Paul Duchesnay of France competed in the 1980s and 1990s and earned world and Olympic medals.) But what the Shibutanis can’t express in couple chemistry they make up for in technical prowess.

How the ShibSibs became a skating team

It was their mother, Naomi, who first thought about pairing them up; Maia, now 23, and Alex, 26, were both taking lessons and she figured it would make sense for them to skate together rather than separately. Their coach agreed, reluctantly, only if the siblings ”wouldn’t kill each other.”

And for the most part, they didn’t. “They have always been each other’s best friend,” says Naomi. “When they were little, Alex was very protective of Maia. As they have gotten older, I don’t sense any seniority between them. They really are on equal footing.” Alex says they had the typical kids’ races to see who could be the first to push the elevator button, but their disagreements have always been relatively muted. Today, even when they disagree on the direction of a skating program, the siblings tend to work together rather than argue and storm off if they don’t get their way. “If they never fought, they wouldn’t be human,” says their father, Chris, who holds both an M.D. and an MBA and is a senior research analyst at Cowen and Company. “But if there are conflicting opinions, these issues are resolved because they both know that they have the same end goal and the same dream. They are a team and know that what benefits one of them benefits the both of them.”

Maia was 4 and Alex 7 when they started skating while growing up in the Northeast. Maia was enthralled by the musicality of the sport, which wasn’t surprising since her parents are both musicians (Naomi plays the piano, Chris plays the flute). Alex tagged along when his mom went to drop Maia off for her lessons, but was less interested in the skating on the ice than in collecting the loose change that had fallen behind the benches by the video games at the rink. “Right away I knew I loved to skate,” says Maia. “Alex, not so much at first, but he gave it a second shot.”

When Alex eventually started taking lessons, mainly to keep from getting bored, they each stuck to singles skating. But’s Naomi’s idea of paring them up took, and before long they were being groomed for elite competitions. As they started to climb the skating ranks and attract the attention of national and international judges, the Shibutanis moved first to Colorado Springs and then to Detroit. Chris stayed back east and shuttled back and forth over the weekend when Naomi and the kids moved west.

As difficult as the separation was for the family, it was paying off for the Shibutanis’ skating career. At their first senior national championships, they finished third. They have trained with Olympic and world champions, including 2014 Olympic gold medalists Meryl Davis and Charlie White and their current Olympic rivals, Tessa Virtue and Scott Moir of Canada. They have steadily climbed the international rankings, earning two bronze medals and a silver at world championships.

At their first Olympics in 2014 in Sochi, the ShibSibs were the second youngest team in the ice dance field, and “to finish in the top 10 was a great accomplishment for them,” says Naomi. “They definitely left the Olympics inspired to work harder than ever before.”

It hasn’t been easy. The pair have battled injuries and illness, and even food poisoning before competing. “I can remember a time when Maia hurled right before she got on the ice. There was another time when Alex was so sick he could barely walk,” says Chris. “But we know that without a doubt, they go out each time with the intention to do their very best. As a parent, what more can you ask for?”

Off the ice they are avid videographers, and post their work on their own YouTube channel, ShibSibs. It’s part travelogue of their journey around the world to skating competitions and shows, and part vlog of their day-to-day lives, providing a glimpse into what it takes to be an Olympian.

At the PyeongChang Olympics, the Shibutani siblings are serious medal contenders in a very deep field of ice dancers, including their onetime training partners Virtue and Moir. Alex recalls that at the first practice session in Detroit after they moved there to train with Marina Zueva and Igor Shpilband, he and Maia were too awestruck to actually skate. Moir, who was also training there at the time, came over and assured them they were just as worthy of skating at the sessions as any of the other teams. It meant a lot to the up-and-coming siblings.

Now, they’re sharing the ice with their idols and former training partners once again — this time in pursuit of Olympic gold. 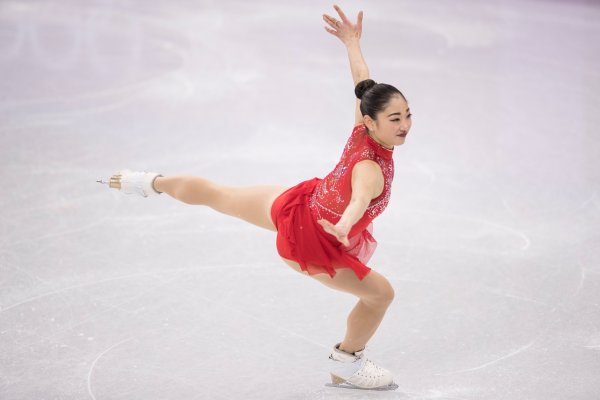 What's Next for Figure Skating at the 2018 Winter Olympics
Next Up: Editor's Pick