Prince Harry and Meghan Markle have arrived in Edinburgh on their first official visit to Scotland, and tartan-wearing soldiers and a Shetland pony were there to greet them.

Hundreds of spectators had gathered outside the castle, braving the cold and wet Scottish weather in the hope of seeing Prince Harry and Markle. The couple are visiting Edinburgh Castle for their fourth public appearance together, following visits to Nottingham, Brixton and Cardiff.

Britain's Prince Harry's fiancée US actress Meghan Markle reacts as she receives a gift during a walkabout on the Esplanade at Edinburgh Castle, during a visit to Scotland on February 13, 2018.
Andrew Milligan—AFP/Getty Images

They were serenaded by the band of the Royal Marines, before Pony Major Mark Wilkinson introduced the couple to Cruachan IV, a Shetland pony and mascot for The Royal Regiment of Scotland.

Prince Harry initially appeared taken with Cruachan, who wore green tartan for the occasion; the prince stroked the pony’s mane and was seen chatting with Wilkinson.

However, at the end of the video released by Kensington Palace’s Twitter account, Prince Harry appears to receive a small nip from the pony, which he quickly laughs off to Markle’s amusement.

Last year Prince Harry was appointed Captain General of the Royal Marines, a role previously held by his grandfather, The Duke of Edinburgh, for more than 64 years.

Prince Harry and Markle recently revealed more details of their upcoming nuptials. The couple will marry at St George’s Chapel, Windsor Castle, England, at midday on May 19. 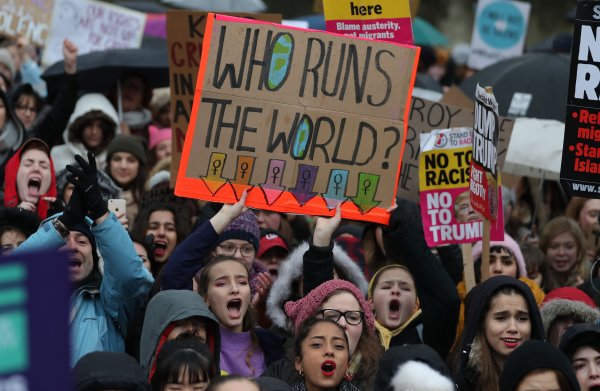 What 100 Years of British Women’s Suffrage Says About Women’s Rights Today
Next Up: Editor's Pick