In the tenth edition of the Gates Foundation’s annual letter, Bill and Melinda Gates have chosen a different tact, tackling head-on “The 10 Tough Questions” they’re often asked about their $40 billion foundation.

Questions range from the political to the personal, including,”Are you imposing your values on other cultures?” and, “What do you have to show for the billions you’ve spent on U.S. education?”

However, the most frequently asked question on the Gates’ list is about the current U.S. president: “How are President Trump’s policies affecting your work?”

In the joint letter, Bill Gates, who recently revealed that his father is suffering from dementia, writes that over the past year, he’s been asked “about President Trump and his policies more often than all the other topics in this letter combined.”

“For decades the United States has been a leader in the fight against disease and poverty abroad,” he said. “These efforts save lives. They also create U.S. jobs. And they make Americans more secure by making poor countries more stable and stopping disease outbreaks before they become pandemics.”

“The world is not a safer place when more people are sick or hungry,” Gates added.

Melinda Gates also criticized how the president conducts himself on social media.

“I wish our president would treat people, and especially women, with more respect when he speaks and tweets,” she wrote.

She added that President Trump “has a responsibility to set a good example and empower all Americans.”

The couple also addressed their own personal privilege in answer to the eighth question—”Is it fair that you have so much influence?”

Melinda Gates responded that “it’s not fair” that their “wealth opens doors” and “world leaders tend to take [their]… phone calls,” but added that the Gates Foundation is “committed” to maintaining transparency. 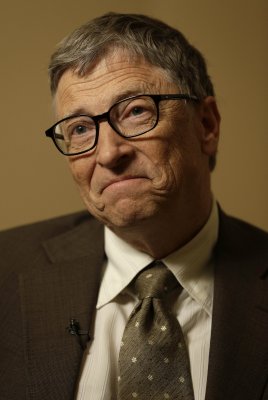 What Happened To Bill Gates' Feces Water Machine
Next Up: Editor's Pick