The Bachelor Recap: Arie Goes Under the Tuscan Sun

Welcome to The Bachelor. This week, Arie is getting in touch with his inner Frances Mayes and heading under the Tuscan sun. It’s also his last chance to revel in dating a whole herd of women, because next week he will visit four home towns, facing down four sets of skeptical parents, and at least a few siblings looking for a fight. As Becca says, “The pressure is on,” while Bekah points out, “The stakes are high.” Chris Harrison shows up just long enough to justify his ticket to Tuscany and to tell the women that there will be no Rose Ceremony this week, just lots of one-on-one dates, one group date, plenty of wine and roses, and lots and lots of reminders that Tuscany is the perfect place to fall in love.

Here’s what happened this week:

Arie and Becca put together a picnic and then sit in park and talk about the status of their relationship, because in the real world they’ve gone on one date, but in Bachelor world they are minutes away from an engagement. They make out, drink wine in public, and make out some more. Over dinner, Arie grills her about her family and her ex-boyfriend and what he would be walking into if he went on a hometown date. She claims she is falling in love with him and can see a future with him (and Neil Lane), and for that she gets a rose—and Arie gets a ticket to Minneapolis to meet Becca’s family.

Jacqueline wants to stay and feel it out, but is having a hard time visualizing bringing Arie home. Kendall casually mentions that she should tell Arie, so she does. Jacqueline admits that she has strong feelings for him, but doesn’t want to fall in love with Arie and fall into The Bachelor whirlwind and wake up one day in Scottsdale trying to remember that she once wanted a PhD in clinical psychology. She cries as she says goodbye to Arie, cries while she makes out with him one last time, cries as she says farewell to the other women, and cries that she does like him, but “sucks at being happy.” She may suck at being happy, but she is good at making very smart life choices.

Arie could tell that Lauren was holding back during their time in Paris, so he wants to try again in the city of Lucca. Arie spends a lot of time talking about Lucca’s walls and Lauren’s walls while Lauren sits there ignoring him while she communes with her pizza in peace. (What if the greatest relationship on this show is between Lauren and her pizza?) Later, Lauren admits that she is scared of being hurt again and while pizza would never hurt her, she is starting to fall in love with Arie anyway. Arie blanks out when she says that and goes to take a walk, leaving Lauren alone at the table. Arie returns a few minutes later and claims he is falling deeply in love with her and feeling very vulnerable. Perhaps it was a nervous stomach situation that made him bolt from the table? He hands her the rose and she assures him that he will love Virginia Beach.

Arie takes Seinne truffle hunting. He says he “digs Seinne,” but does he dig her enough? They hunt truffles, cook an Italian meal, and get grilled about their feelings about love by an Italian family. Over dinner, Arie asks Seinne how she feels about their relationship and she makes a fatal mistake: she is honest. She doesn’t tell this near-stranger that she is falling in love with him, merely that she really likes him and wants more. Becca and Lauren were willing to use the L-word and she wasn’t, thus Arie bids her farewell.

Arie takes Kendall, Tia, and Bekah to wander the grounds of a Tuscan villa, where the girls later try not to wander into each other making out with Arie. Kendall starts planning her life with Arie, a man she has never gone on a one-on-one date with, which Arie loves. They make out. Tia uses her alone time with Arie to address her concerns that some women (Bekah) aren’t taking this whole Bachelor thing seriously enough and may not be ready to get married. Then she makes out with Arie. Tia then goes to tell Bekah what she said, which proves she is not two-faced, but is perhaps delusional that anyone would take this well. Bekah runs away crying straight into Arie’s arms. She tells him that big mean Tia hurt her feelings and that she is serious and does want Arie to meet her family. Bekah’s mother would probably appreciate a hometown visit, too, since she reported her daughter missing and all. Arie makes out with Bekah for awhile to let her know he takes her seriously. Then he gives Kendall a rose and sends her home so he can revel in the Italian opera he has created. He takes time with Bekah and Tia then hands another rose to Tia, ensuring a trip to Arkansas. Bekah cries her mascara off in the back of the limo. Guess it’s back to the marijuana farm for her. 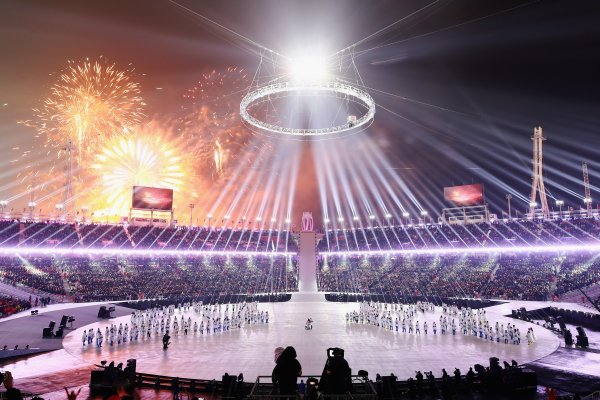 The Olympics Opening Ceremony Left America Out in the Cold
Next Up: Editor's Pick