Bloomberg via Getty Images
Ideas
By Tara Westover
Westover is the author of Educated: A Memoir.

Tara Westover was raised by fundamentalist Mormon survivalists in the mountains of Idaho. She never attended school and was home-schooled only when there was time after work in the family salvage and herbalist business. In her memoir Educated, she tells the story of how at 16 she taught herself enough math and grammar to get accepted into Brigham Young University and went on to receive her PhD from the University of Cambridge, at the cost of her relationship with her family. The following is an excerpt from the book.

American history was held in an auditorium named for the prophet Joseph Smith. I’d thought American history would be easy because Dad had taught us about the Founding Fathers — I knew all about Washington, Jefferson, Madison. But the professor barely mentioned them at all, and instead talked about “philosophical underpinnings” and the writings of Cicero and Hume, names I’d never heard.

In the first lecture, we were told that the next class would begin with a quiz on the readings. For two days I tried to wrestle meaning from the textbook’s dense passages, but terms like “civic humanism” and “the Scottish Enlightenment” dotted the page like black holes, sucking all the other words into them. I took the quiz and missed every question.

That failure sat uneasily in my mind. It was the first indication of whether I would be okay, whether whatever I had in my head by way of education was enough. After the quiz, the answer seemed clear: it was not enough. On realizing this, I might have resented my upbringing but I didn’t. My loyalty to my father had increased in proportion to the miles between us. On the mountain, I could rebel. But here, in this loud, bright place, surrounded by gentiles disguised as saints, I clung to every truth, every doctrine he had given me. Doctors were Sons of Perdition. Homeschooling was a commandment from the Lord.

Failing a quiz did nothing to undermine my new devotion to an old creed, but a lecture on Western art did.

The classroom was bright when I arrived, the morning sun pouring in warmly through a high wall of windows. I chose a seat next to a girl in a high-necked blouse. Her name was Vanessa. “We should stick together,” she said. “I think we’re the only freshmen in the whole class.”

The lecture began when an old man with small eyes and a sharp nose shuttered the windows. He flipped a switch and a slide projector filled the room with white light. The image was of a painting. The professor discussed the composition, the brushstrokes, the history. Then he moved to the next painting, and the next and the next.

Then the projector showed a peculiar image, of a man in a faded hat and overcoat. Behind him loomed a concrete wall. He held a small paper near his face but he wasn’t looking at it. He was looking at us. I opened the picture book I’d purchased for the class so I could take a closer look. Something was written under the image in italics but I couldn’t understand it. It had one of those black-hole words, right in the middle, devouring the rest. I’d seen other students ask questions, so I raised my hand.

The professor called on me, and I read the sentence aloud. When I came to the word, I paused. “I don’t know this word,” I said. “What does it mean?”

There was silence. Not a hush, not a muting of the noise, but utter, almost violent silence. No papers shuffled, no pencils scratched.

The professor’s lips tightened. “Thanks for that,” he said, then returned to his notes.

I scarcely moved for the rest of the lecture. I stared at my shoes, wondering what had happened, and why, whenever I looked up, there was always someone staring at me as if I was a freak. Of course I was a freak, and I knew it, but I didn’t understand how they knew it.

When the bell rang, Vanessa shoved her notebook into her pack. Then she paused and said, “You shouldn’t make fun of that. It’s not a joke.” She walked away before I could reply.

I stayed in my seat until everyone had gone, pretending the zipper on my coat was stuck so I could avoid looking anyone in the eye. Then I went straight to the computer lab to look up the word “Holocaust.”

I don’t know how long I sat there reading about it, but at some point I’d read enough. I leaned back and stared at the ceiling. I suppose I was in shock, but whether it was the shock of learning about something horrific, or the shock of learning about my own ignorance, I’m not sure. I do remember imagining for a moment, not the camps, not the pits or chambers of gas, but my mother’s face. A wave of emotion took me, a feeling so intense, so unfamiliar, I wasn’t sure what it was. It made me want to shout at her, at my own mother, and that frightened me.

I searched my memories. In some ways the word “Holocaust” wasn’t wholly unfamiliar. Perhaps Mother had taught me about it, when we were picking rosehips or tincturing hawthorn. I did seem to have a vague knowledge that Jews had been killed somewhere, long ago. But I’d thought it was a small conflict, like the Boston Massacre, which Dad talked about a lot, in which half a dozen people had been martyred by a tyrannical government. To have misunderstood it on this scale — five versus six million — seemed impossible.

I found Vanessa before the next lecture and apologized for the joke. I didn’t explain, because I couldn’t explain. I just said I was sorry and that I wouldn’t do it again. To keep that promise, I didn’t raise my hand for the rest of the semester. 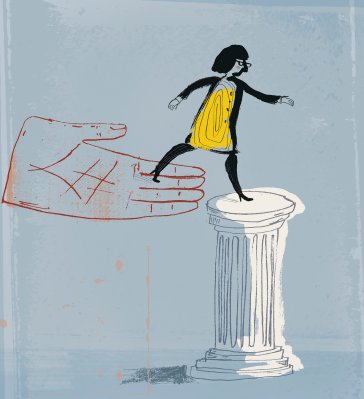 #MeToo and the End of Teflon Men
Next Up: Editor's Pick