Let Olympic ice dancer Yura Min show you how to recover expertly from a wardrobe malfunction.

As Min hit the ice with her partner Alexander Gamelin on Sunday, her costume became unhooked just seconds into their routine.

“I was like, ‘Oh no!’” she told The Detroit Free Press. “If that comes undone, the whole thing could just pop off. I was terrified the entire program.”

While Min, who has dual citizenship in South Korea and the United States, could have stopped to fix the clasp, she didn’t want to lose points. “This is my first Olympics, our first program and if my top were to come down, that would have been a disaster,” she said.

So she powered on and managed to avoid any more snafus by skating with her shoulders back and head held high. Unfortunately a stiff back doesn’t make for a fluid, graceful ice dance and the pair, who were competing for South Korea, placed near the bottom of the rankings, 9th out of ten competitors. Min took the wardrobe malfunction in stride, though. “I promise to sew myself in for the individual event,” she wrote on Twitter on Sunday, adding a laughing emoji. “I would like to thank the audience for keeping us going until the end. Couldn’t have done it without you guys.”

Min’s good-natured response should earn her points with fans, if not the judges. Min may be okay with that, though. Last week she told The Boston Globe that she and her partner were at the Olympics for the experience, not the top prize. “We’re not going for a medal or anything, so there’s not that much pressure on us,” she said. “We just want to have fun.” 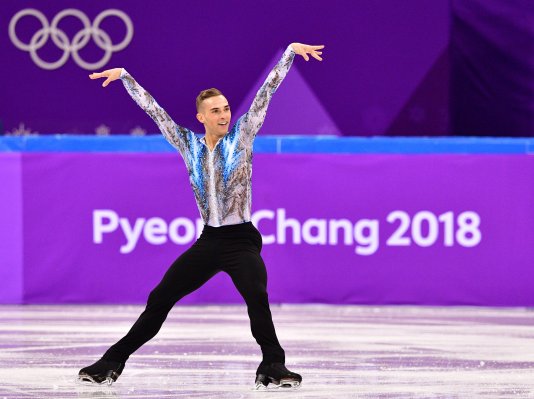 Adam Rippon's Grace Under Pressure Is Exactly What the Olympics Needed
Next Up: Editor's Pick