The Mysterious History of the Real Saint Behind Valentine's Day

Nowadays, the premise of Valentine’s Day is simple to understand: Feb. 14 is a time to show appreciation for friends, families, significant others and anyone else you might love. Pinpointing the story of its namesake Saint Valentine, however, is more difficult.

There are multiple legends of Saint Valentine, and different reliquaries in the Czech Republic, Ireland, Scotland, England and France all claim to have bones attributed to a Saint Valentine.

While Catholics believe that Feb. 14 commemorates the martyrdom of Saint Valentine, who was a Roman priest beheaded in the third century, no one can agree on exactly what he did or why he was executed. Some legends say Valentine was a bishop in Terni, Italy, who healed the sick, including the blind daughter of a prison guard whom he met while in jail for practicing Christianity in a pagan world. Some say he was sentenced to death because he tried to convert Emperor Claudius to Christianity. Others say the sentence came because he was caught secretly performing weddings, defying a ban on marriage that had been imposed by the Emperor as a solution to a military recruitment crunch.

Portrait of the trial of St. Valentine circa 260 AD by Bart Zeitblom.
Hulton Archive—Getty Images

The feast day’s earliest associations with love and fertility may have been inherited from the pagan festival of Lupercalia, which was celebrated by the ancient Romans between Feb. 13 and Feb. 15. A matchmaking lottery would pair men and women up for the duration of the festival, and the men would slap women with the hides of goats and dogs they had sacrificed, which was thought to make the women fertile, historian Noel Lenski has told NPR. It’s thought that Pope Gelasius I established the feast of Saint Valentine in the fifth century to “Christianize” the festival.

But Saint Valentine’s feast day didn’t used to be a big to-do — which should please those who think too much is being made of it now.

“Valentine was not one of the more important saints venerated by medieval people — nor was his feast one of the 40 to 50 festa ferianda, or celebratory festivals, which required people to abstain from work in order to fast and attend mass,” Sarah Peverley, a professor of English at the University of Liverpool, explained in a piece for The Conversation. Plus, the holiday fell right in the middle of a run of much bigger holidays, such as Candlemas on Feb. 2, as well as the carnivals leading up to the Shrove Tuesday and the beginning of the Lenten fast season, which often fall around the same time. (Valentine’s Day in 2018, for example, fell on the same day as Ash Wednesday.)

That began to change in the Middle Ages. It’s believed to be around that time, as notions of courtly love gained influence in Europe, that some celebrants found a more cheerful way of explaining why Saint Valentine’s feast day should be a time to think about romance. Poets, most famously Geoffrey Chaucer in his 14th-century “Parliament of Fowls,” were the ones who put it together that the day fell right around the time of year when birds would sing their mating songs to get ready for the spring. He wrote, per one translation, “For this was on Saint Valentine’s day / When every bird cometh there to chose his mate.” A February 1477 letter in which Margery Brews of Norfolk, England, called her fiancé John Paston “my right well-beloved valentine” is considered the oldest known Valentine written in English (and is now housed at the British Library).

Such romantic phrases and images started appearing on greeting cards once the industrial revolution in the mid-19th century enabled the production of mass quantities of affordable consumer goods. Cadbury’s heart-shaped boxes of chocolates appeared in the 1860s, Hershey’s Kisses in 1907, and Hallmark Valentine’s Day cards in 1913 — all of which have remained Valentine’s Day traditions.

And the enthusiasm has shown no signs of flagging, even if the story of Saint Valentine is not exactly well-known. This year, the National Retail Foundation predicts that U.S. consumers will spend $19.6 billion on Valentine’s Day celebrations, just shy of the record of $19.7 billion spent in 2016. 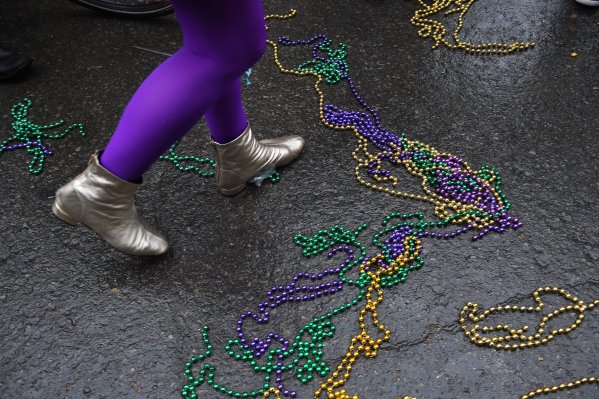 The History Behind 5 of New Orleans' Favorite Mardi Gras Traditions
Next Up: Editor's Pick